How to Add Social Proof to Your Nonprofit’s Website

“I’m seriously considering donating to this charity. It makes sense.” You’ve probably heard that statement from someone. You might have even said it yourself.

Most people who make statements like the one above often believe that they’re making independent, unbiased decisions. But in reality, they’re conforming to a phenomenon called social proof.

Social proof—or informational social influence theory—became famous thanks to Robert Cialdini and his bestselling book, Influence. If you’ve ever made decisions because of facts presented to you, videos or images you’ve seen, comments of people you admire, then you’ve been under the influence of social proof.

The best part is, you can ethically adopt the principles of social proof to the benefit of your nonprofit.

In this post, we discuss how to leverage this powerful phenomenon to increase donations for your non-profit’s website.

An example of negative social proof is attempting to caution people on the risk of not subscribing to your offer and backing up your claims with proof of those who missed out.

It’s ‘negative’ because it’s social proof that works against your goals.

Psychologists Robert Cialdini, Steve Martin, and Noah Goldstein carried out persuasion studies as reported in their book, Yes! They based those studies on persuasion theories.

One of their tests used negative social proof. The psychologists tried to reduce theft at the Arizona Petrified Forest, so they tested three signs.

One of the signs read:

“Many past visitors have removed the petrified wood from the park, destroying the natural state of the Petrified Forest.”

Instead of reducing the theft of petrified wood, the study showed that theft tripled after they posted this sign.

The sign confirmed that people stole woods, so it encouraged a bandwagon effect. Other people felt it’s okay to steal the woods!

In essence, negative social proof, unlike other social proofs, produces the opposite outcome you intended. 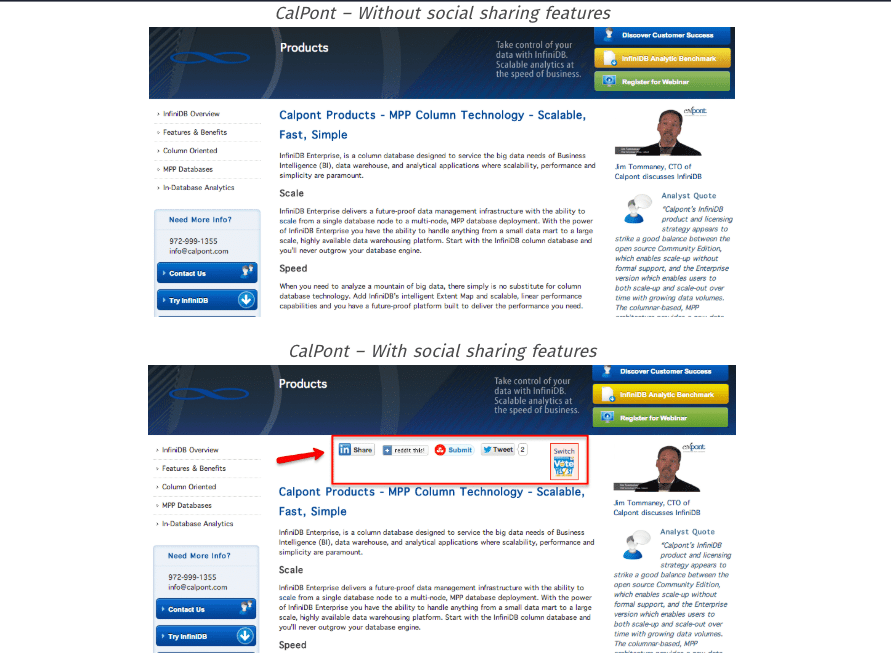 The Visual Website Optimizer blog reviewed the effect that low social share counts had on their website’s social media buttons. They performed an A/B split test and found out that removing social buttons on pages with low social counts increase their website’s conversions. And it makes sense. If you can see that the page you’re reading hasn’t been shared by others, you’re unlikely to share it yourself.

In short, low social proof makes you look unpopular and in essence, prevents prospective donors from believing in your cause.

People tend to think in stats and facts. And with good reason: statistics can and will increase your potential donor’s trust in your cause (when used correctly, of course).

Specifically, you can avail stats to show your success in your work. Also, tell how your targets have become better off as a result of your organization’s involvement. Call specific figures.

One good practice to follow is to declare how much you’ve spent on your cause; the impact it has made on the community you’re serving; the number of lives it has impacted; the number of years you’ve been active, and more.

Charities like LA Family Housing and Citizens for Los Angeles Wildlife, CLAW, use stats to their advantage. Let’s examine the strategies they’re using in more detail.

CLAW advocates for the protection of wildlife in Los Angeles, California.

CLAW states that without connectivity between habitat blocks, animals have reduced access to food and mating partners, which threatens their ability to survive in the wild. They backed this statement up with the image below. 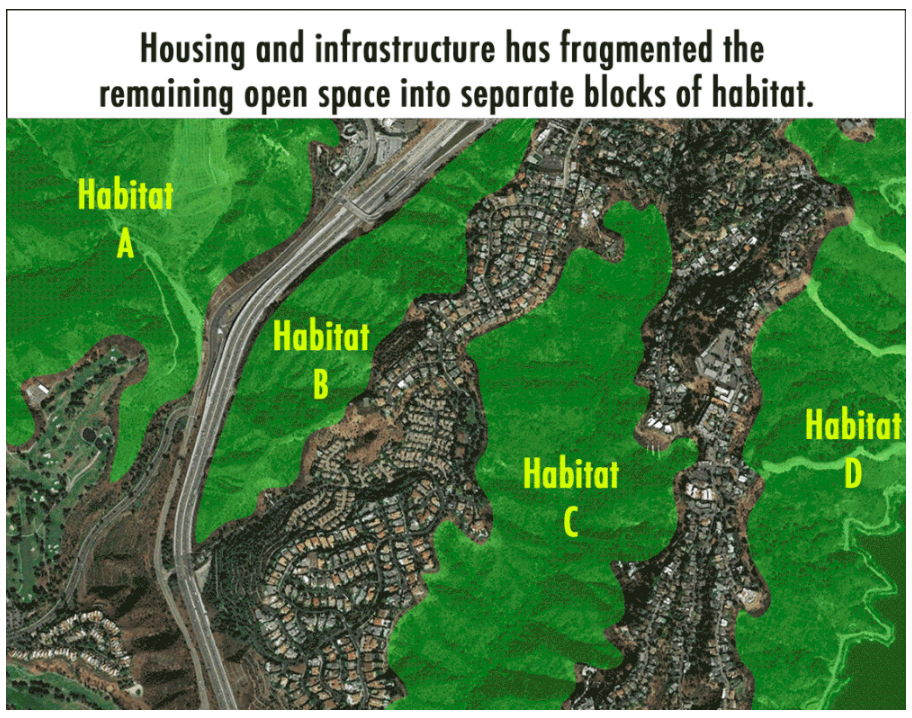 To strengthen the above claim, they showed how Open Habitat in the Bel Air area was favorable for wildlife in 1947 as compared to the present.

Here’s the Open Habitat in Bel Air area in 1947. The image shows easy connectivity between habitat blocks in 1947. 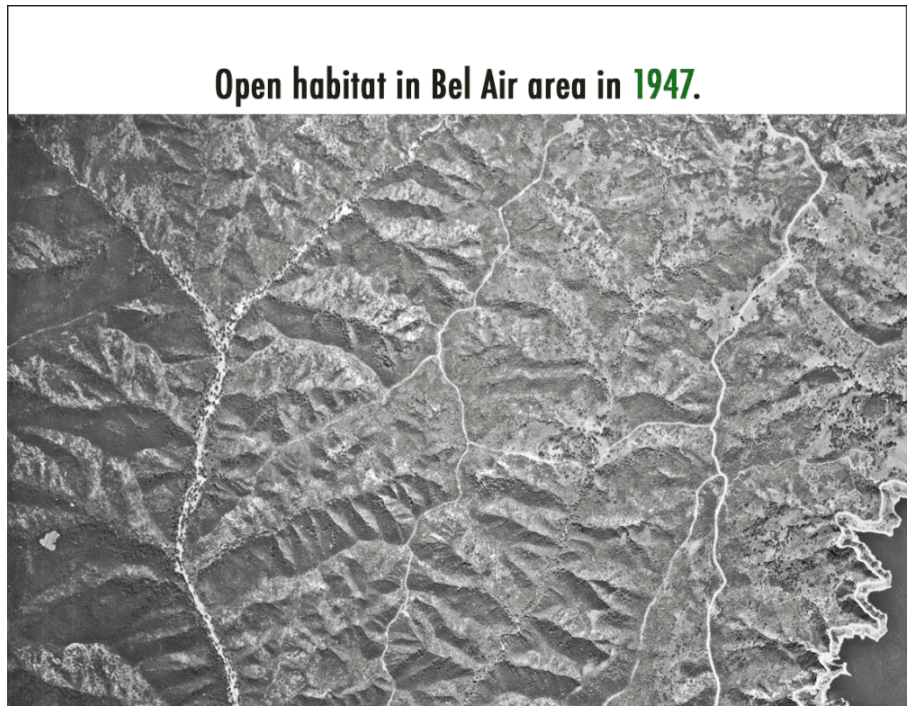 Now, consider the Open Habitat in Bel Air area today. This image shows less connectivity between habitat blocks due to road constructions and other human activities. 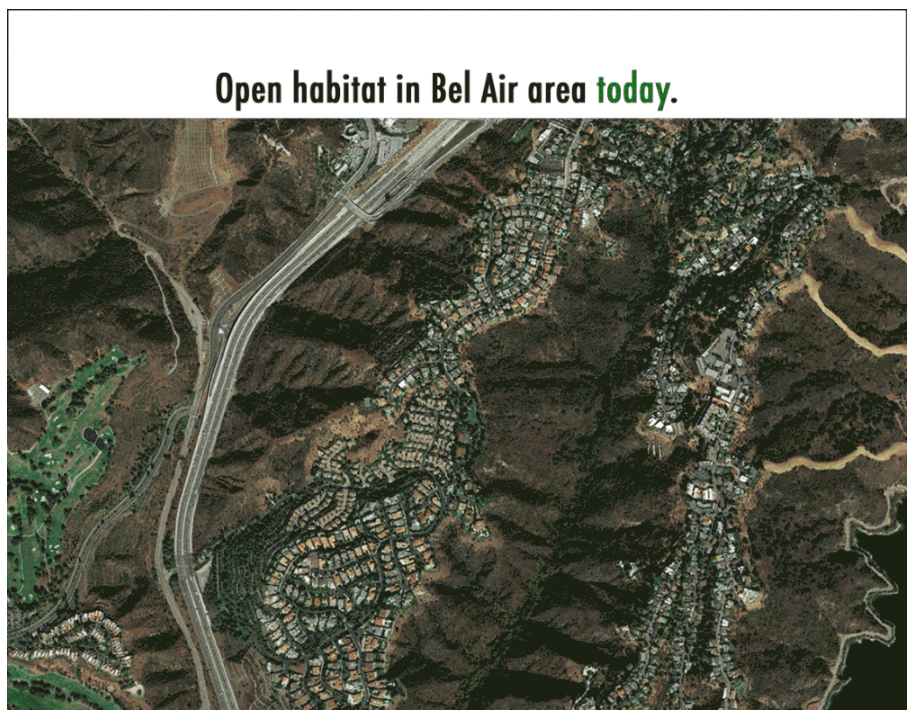 Furthermore, CLAW presented the number of species that tested positive for rodenticide exposure in California. 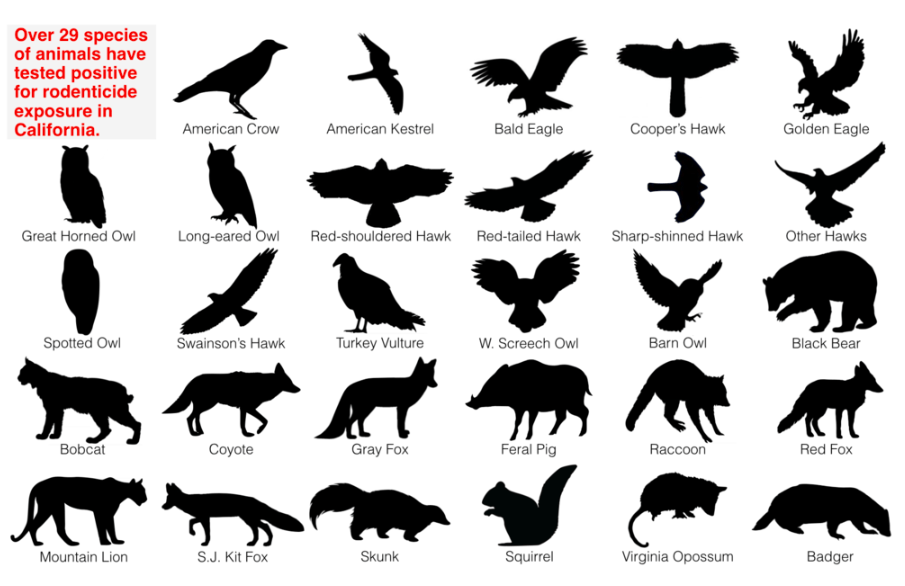 They added clarity to the number of animal species that tested positive for rodenticide exposure by grouping the animals by percentage affected. 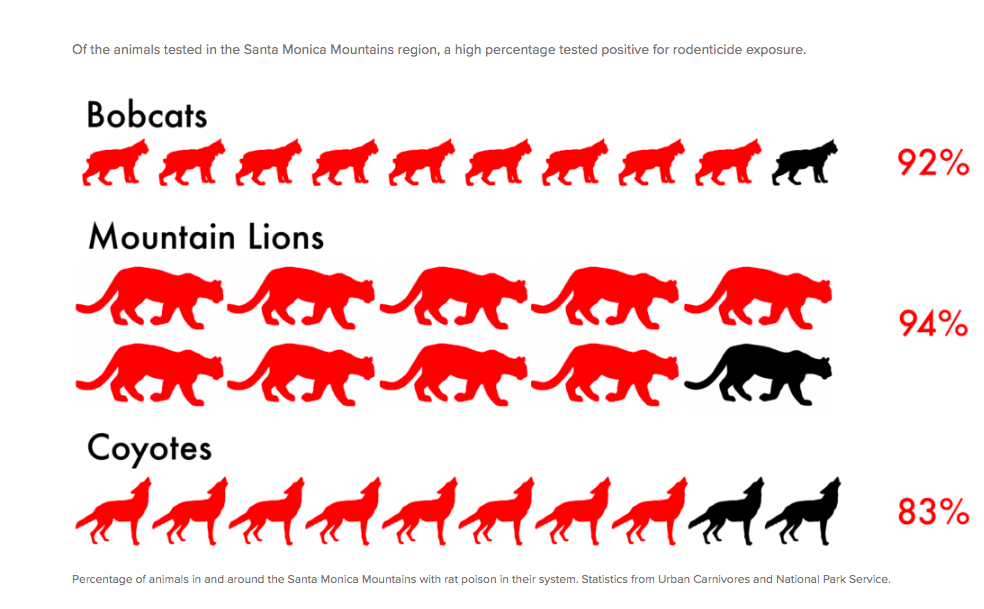 LA Family Housing showed off exactly how many people have benefited from their charity efforts. They helped 11,000 people with their housing needs in 2018, and that number reflects a 71 percent increase in what they did in 2015. 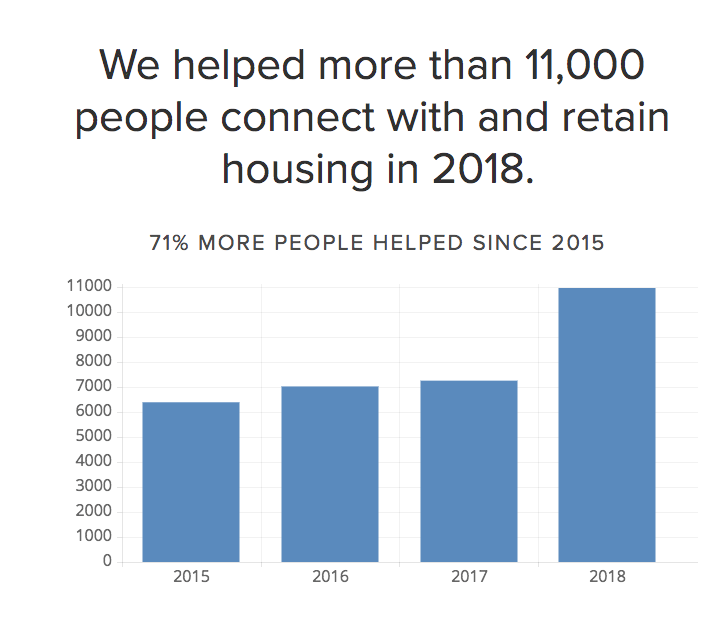 The organization appealed to the emotions of potential donors by showing off that they’ve done their homework and understand the needs of the people they serve.

The organization revealed that out of every four homeless persons, three have no shelter at all and these people had lived in LA before they became homeless. So they weren’t strangers. The presentation of stats here seems to appeal to LA residents to help their own.

Furthermore, they weaved the homelessness challenge of the area into other social ills like domestic violence and abandoned veterans. Potential donors can see that solving homelessness in LA has a positive ripple effect on other issues in the area.

Lionel Messi probably doesn’t drink Pepsi Cola all day. But given the ads, a Messi fan would stick to Pepsi Cola if they have to choose between fizzy drinks. We love celebrities, and they influence our choices both directly and indirectly.

Case Study 1: People for the Ethical Treatment of Animals

PETA is advocating for the ethical treatment of animals, and this is how they’ve employed the halo effect. 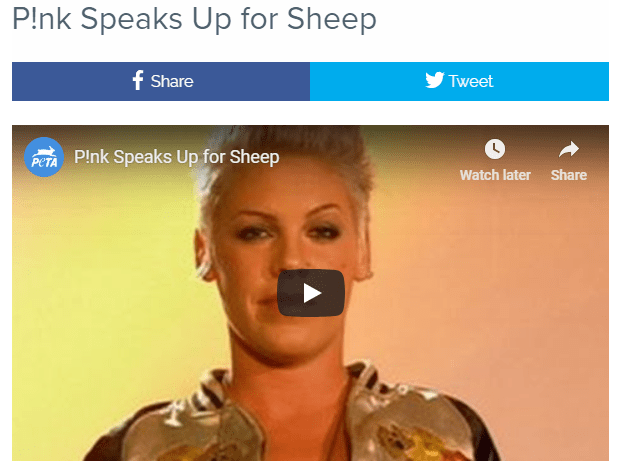 PETA got Alecia Beth Moore, better known for her stage name Pink, to appear in a video. In it, Pink advocates for the ethical treatment of sheep. In another campaign, Pink advocates that consumers find alternatives to animal skin for clothing. This promotion later featured on the Huffington Post. 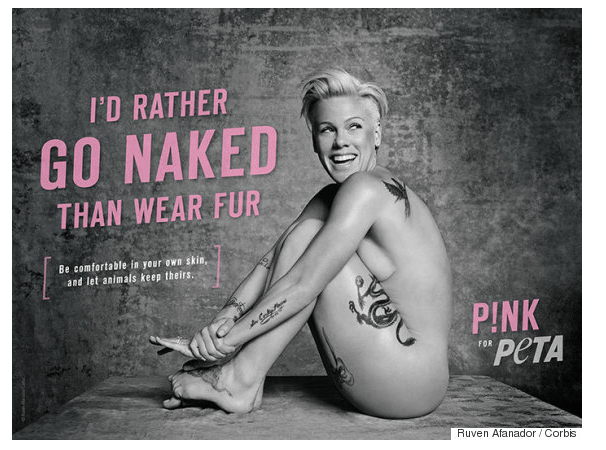 PETA probably enjoys success with their use of celebrity endorsements. The nonprofit has a bunch of celebs endorsing them. And according to Charity Navigator, at 98.6 percent of total contributions sources, they seem to make most of their money from contributions, gifts and grants, and not from hosting fundraising events. 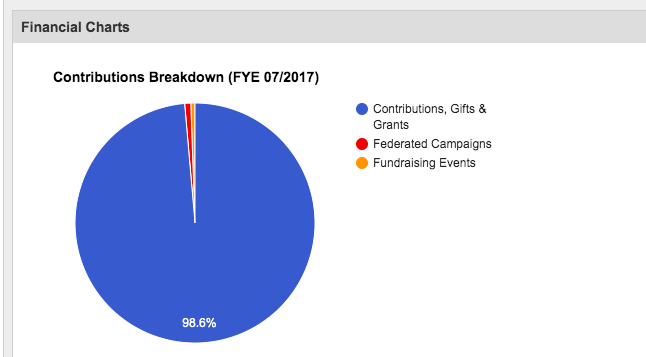 Whether PETA pays for these campaigns or they’re voluntary endorsements isn’t the point here. The organization is getting its message out to potential donors via trusted faces! PETA enjoys the halo effect of celebs like

Shanti Bhavan caters for socially and economically disadvantaged Dalit kids in rural India.  The nonprofit organization has its educational series “Daughter of Destiny” featured on Netflix. Given its media notoriety, Netflix carries a significant halo effect.

The nonprofit features its Netflix appearance prominently on its website. They also give site visitors access to their trailer to encourage them to see the series.

The Shanti Bhavan Children’s Project also shows off other media endorsements and appearances alongside their Netflix feature. This organization’s method is pretty strong as site visitors will follow their Netflix originals series to engage with the nonprofit on an ongoing basis.

Shanti Bhavan Children’s Project keeps a dedicated media page to show off all the places they’ve been featured. The press page also provides links to all their media features.

Here is how Medical Assitant Programs, MAP and San Francisco-Marin Food Bank used verifiable and emotional stories to create buy-in for their charities.

MAP’s mission is to ensure that medical supplies get to people who don’t have access to standard health care. On MAP’s website, you’ll find stories from three classes of people.

You will find stories from real locals who’ve benefited from MAP. The nonprofit made videos of these beneficiaries to help create even deeper emotional connections for their target donors. 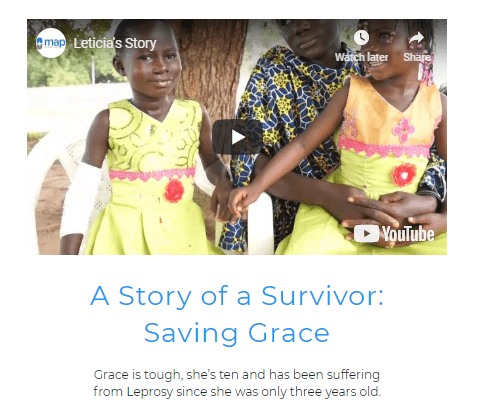 The charity prominently features their partners to let you know they have people who make these those stories possible.

And then the charity gently invites you to partner with them to reach more people with their work.

The website’s call-to-action doesn’t stop at one story. MAP effectively mixes stories and invitations to their target donors to join in making their work possible.

Furthermore, MAP included top media partners on their website’s footer. This prominent feature makes it easy to see that the charity has endorsements from top organizations. The media features give credentials to MAP’s stories.

The nonprofit advocate for food sufficiency, especially for less-privileged residents. They aim to eradicate hunger in Marin and San Francisco. 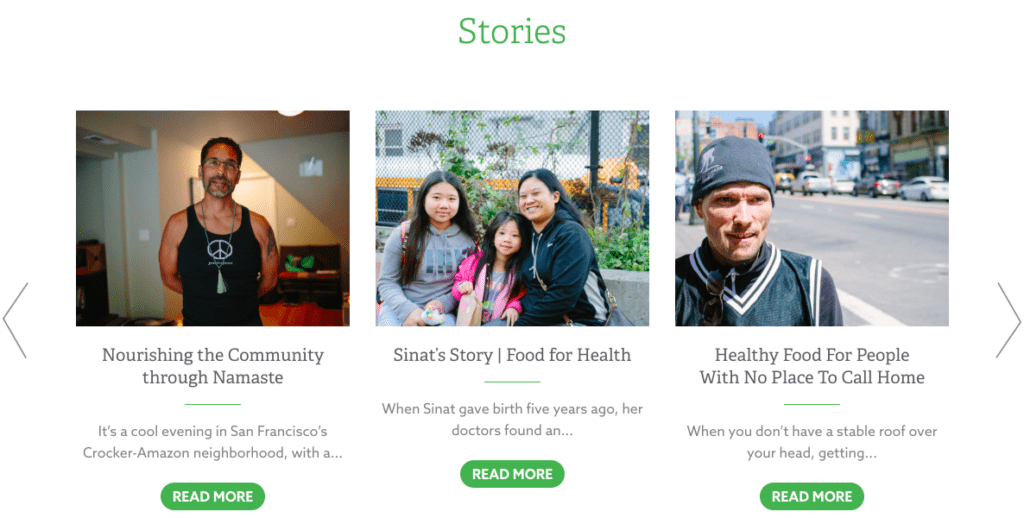 The above image shows a carousel of stories of how people, especially the homeless, were able to have access to healthy foods.

SF-Marin also included some verifiable stats to back up the stories.

5. Leverage Your Site Design and Presentation

Avoid unnecessary details on your website. Make it fast and easy to navigate, so people can understand your cause better.

If your site won’t load in 3 seconds or less, you’d lose 53 percent of its mobile visitors. You want a site design and presentation that conveys your nonprofit’s message squarely. 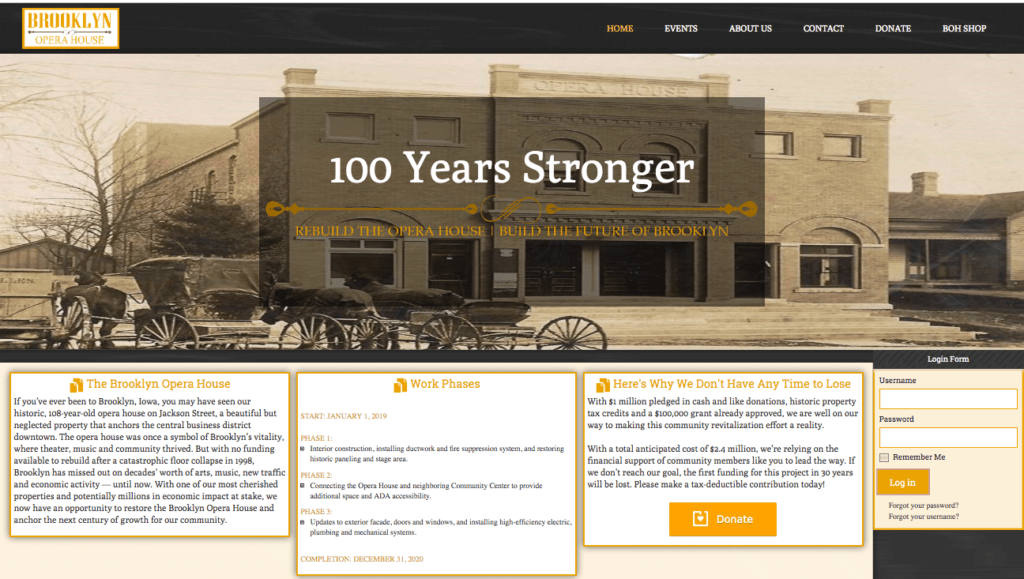 Simple and precise, isn’t it? Without even clicking on a link on the website, you already have enough information on what Brooklyn Opera House entails. No dilly-dallying. It’s straight to the point with a visible call-to-action (CTA).

Also, the navigation menu is simple, neatly arranged, and easy-to-follow.

Michael J. Fox Foundation is a nonprofit and research organization seeking the cure for Parkinson’s Disease. Here’s how they’re making the most of site design and presentation.

This is the top half of their home page. Notice how they defined the mission succinctly? The three CTAs underneath Fox’s image give you a clearer picture of the intended action with detailing subs.

Also, notice how the “Donate” CTA is hanging on the top right making it hard to ignore. 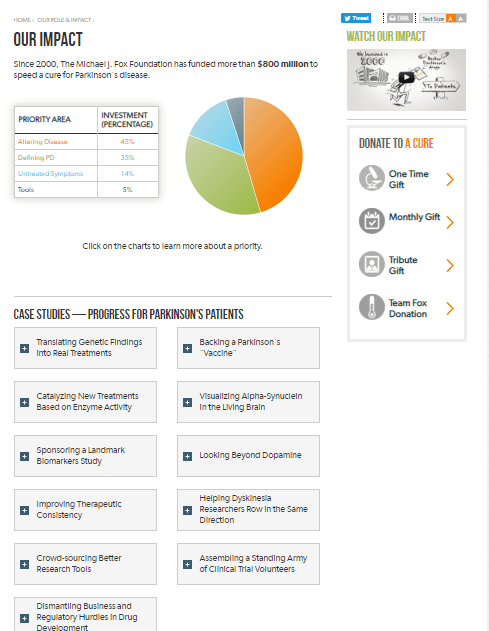 Here is their impact page. By avoiding unnecessary long texts, they’re strategically representing their journey and impact graphically. Also, prospects can easily access case studies right on one page if they wish.

There’s no need to load different pages. The goal here is to be precise, straight to the point, and enhance the user (or prospective donor) experience.

Having the right cause just isn’t enough to garner traction and attract donors to your campaign. You need social proof. With the five tactics provided here, you stand at an advantage to make things work for your cause! Use them now.

Are you using social proof on your nonprofit’s website today? If not, which social proof strategy will you use first? Leave a comment below. 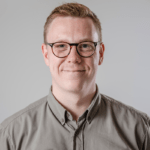 Emil Kristensen is the CMO and co-founder of Sleeknote: a company that helps e-commerce brands engage their site visitors—without hurting the user experience. 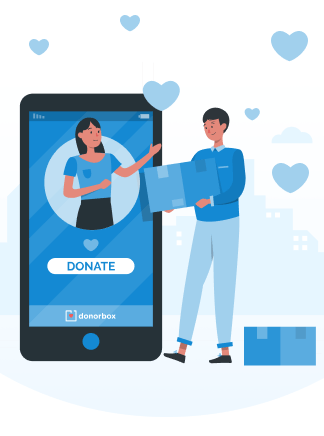