Note: The video above is a clip of retired O.P.P. officer Vincent Gircys (who stands with the people) during an interview with Laura Lynn Thompson on Dec.15, 2020.

February's funding goal is for 200,000 copies of the March issue of Druthers. We printed 25,000 for December, 50,000 for January & 100,000 for February. All are being freely distributed by 200 volunteers across Canada. Think we can double the print run again for March? I think so. But it is up to the people, as this is entirely funded by donations. If you love and appreciate this newspaper, please donate as generously as you can. 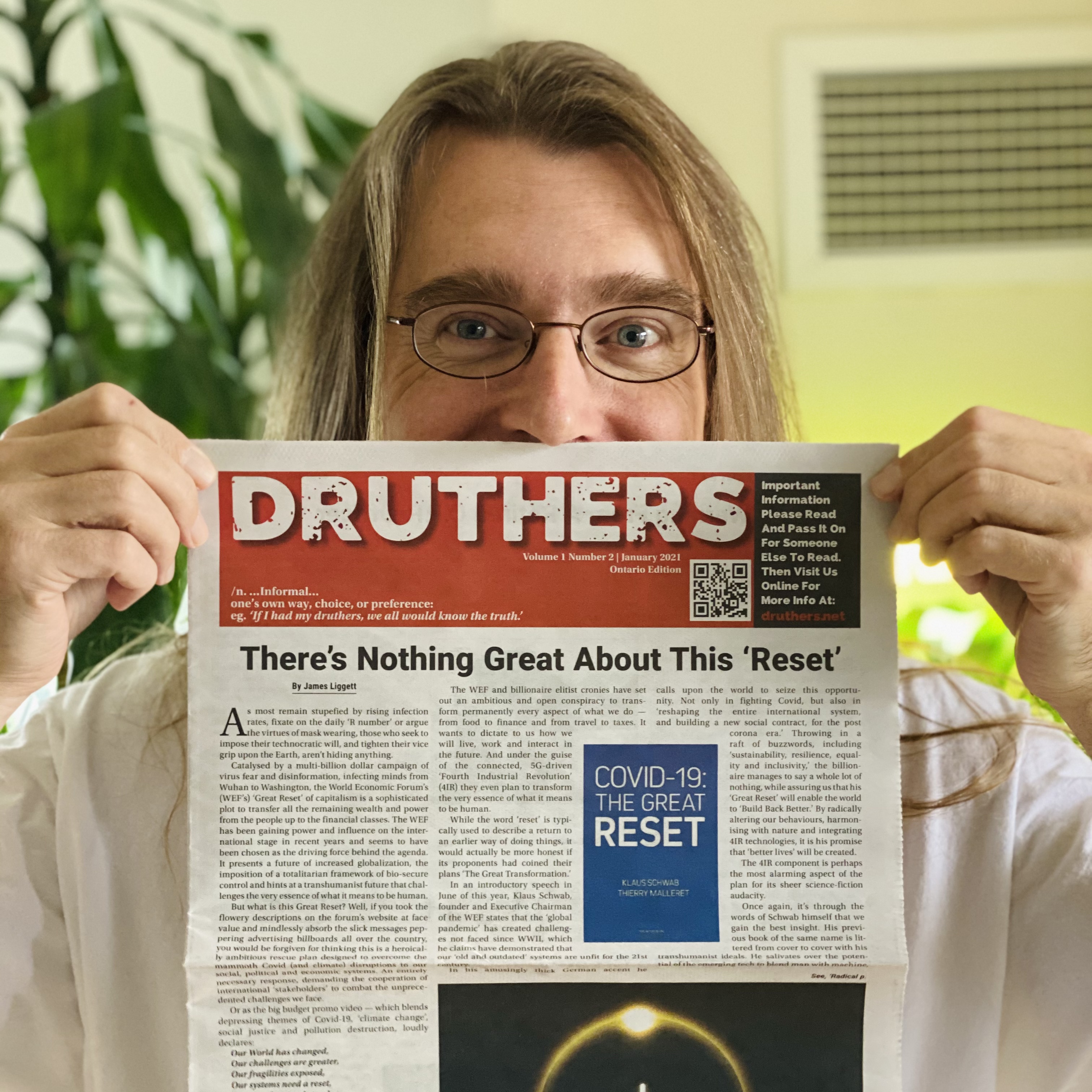 Druthers, an old word meaning; "One's own way, preference or choice." Druthers is also a 12 page, monthly newsprint publication with REAL NEWS & information which is freely distributed by over 200 volunteers across Canada.

To anyone paying any level of attention, it is clear that mainstream news is insanely out of control this year, acting entirely as a propaganda machine for the interests of giant corporations who are aiming to, quite literally, restructure and take over the world. (This is not a theory, it is fact, as stated by many of the big players in this global agenda.)

Big tech is in cahoots, rampantly deleting and censoring anything that strays from the mainstream story as told by the W.H.O.. They even outright admit they are doing so, which is absolutely outrageous and a dangerous path for humanity to be led down.

And how about those fact checker sites? Those are a complete sham and are doing a tremendous disservice to humanity. Created and funded by the very same people who are desperately trying to control the information.

All this is leaving much of the population confused and uncertain, so most people just do what they are told and ‘play safe’, just in case, even though most people know something is terribly wrong with all this.

It is a battle of information… a battle for our minds.

Even many government officials are feeding us outright lies and misinformation. We all know that many politicians are corrupt, traditional media is full of lies & giant corporations use their immense resources to extract as much money from the people as they possibly can. So why do we continue to blindly follow along and do as they say? These people, companies and organizations clearly do not have our best interests in mind.

My name is Shawn Jason and some friends and I have created a new, free, alternative newspaper in an effort to get real news and information into the hands (and hopefully minds) of the people. We are dedicated to sifting though the information to uncover what is really going on in Canada, and the world.

Your help is requested.

• December 2020 was our first issue with 25,000 copies printed and freely distributed across Ontario by volunteers. (read the digital online version here)

• January 2021 we doubled down and printed 50,000 copies, again freely distributed across Ontario by volunteers. (read the digital online version here)

• February 2021 we doubled down again and printed 100,000 copies which are being freely distributed across CANADA! (read the digital online version here) 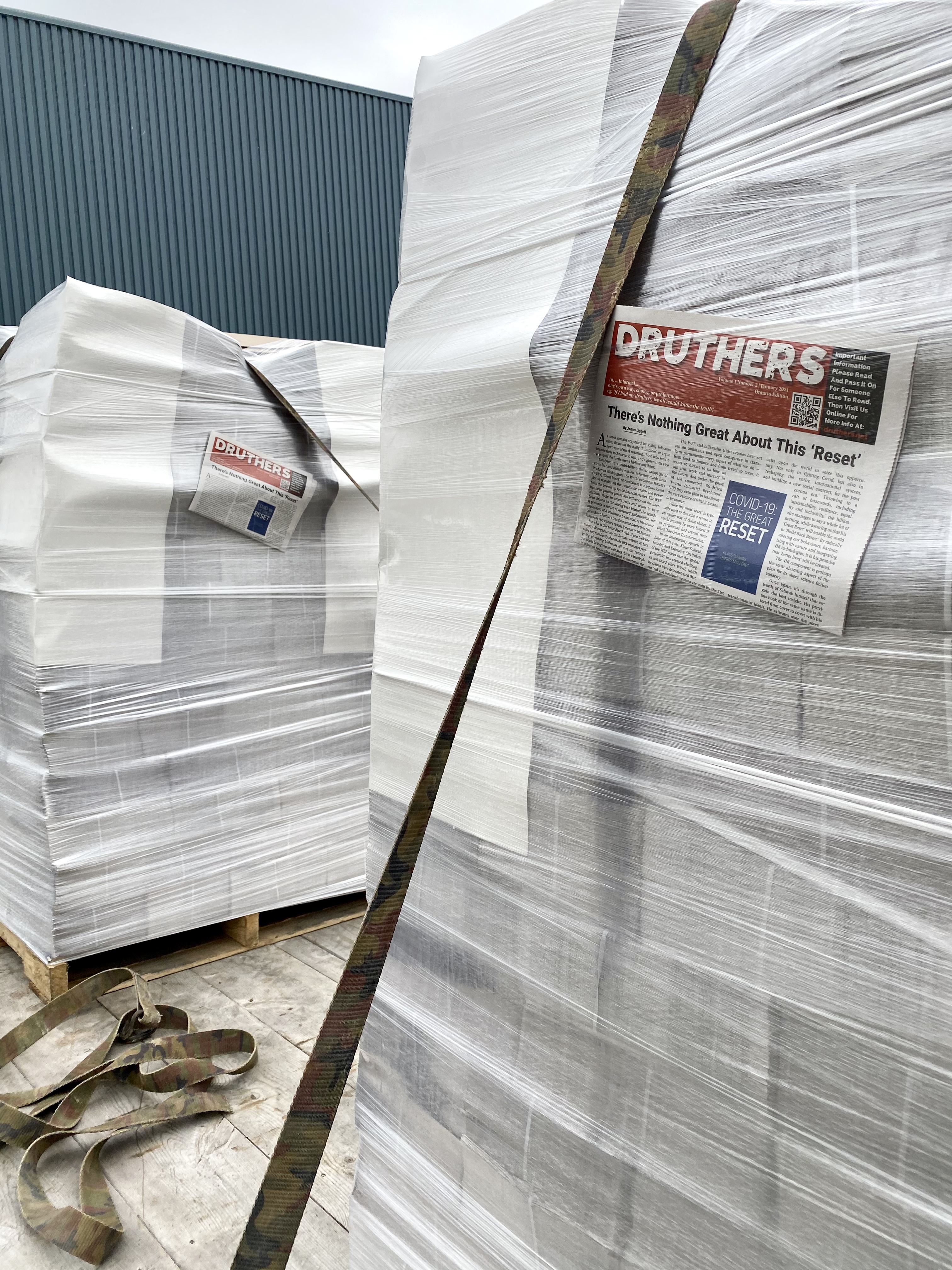 CENSORSHIP IS DETRIMENTAL TO EVERYONE

With the mainstream media being full of spin and untruths (a full on propaganda machine) and with the big tech companies censoring and deleting any voices who speak out against the official narrative, going old-school and printing a newspaper seemed to be the best to way to get around all this censorship & propaganda and put real information into people's hands.

If you wish to see honest, truthful news & information getting into the hands of the general population, please consider helping Druthers with a kind donation. Dig deep and donate if you can. Every contribution helps and is put to good use. 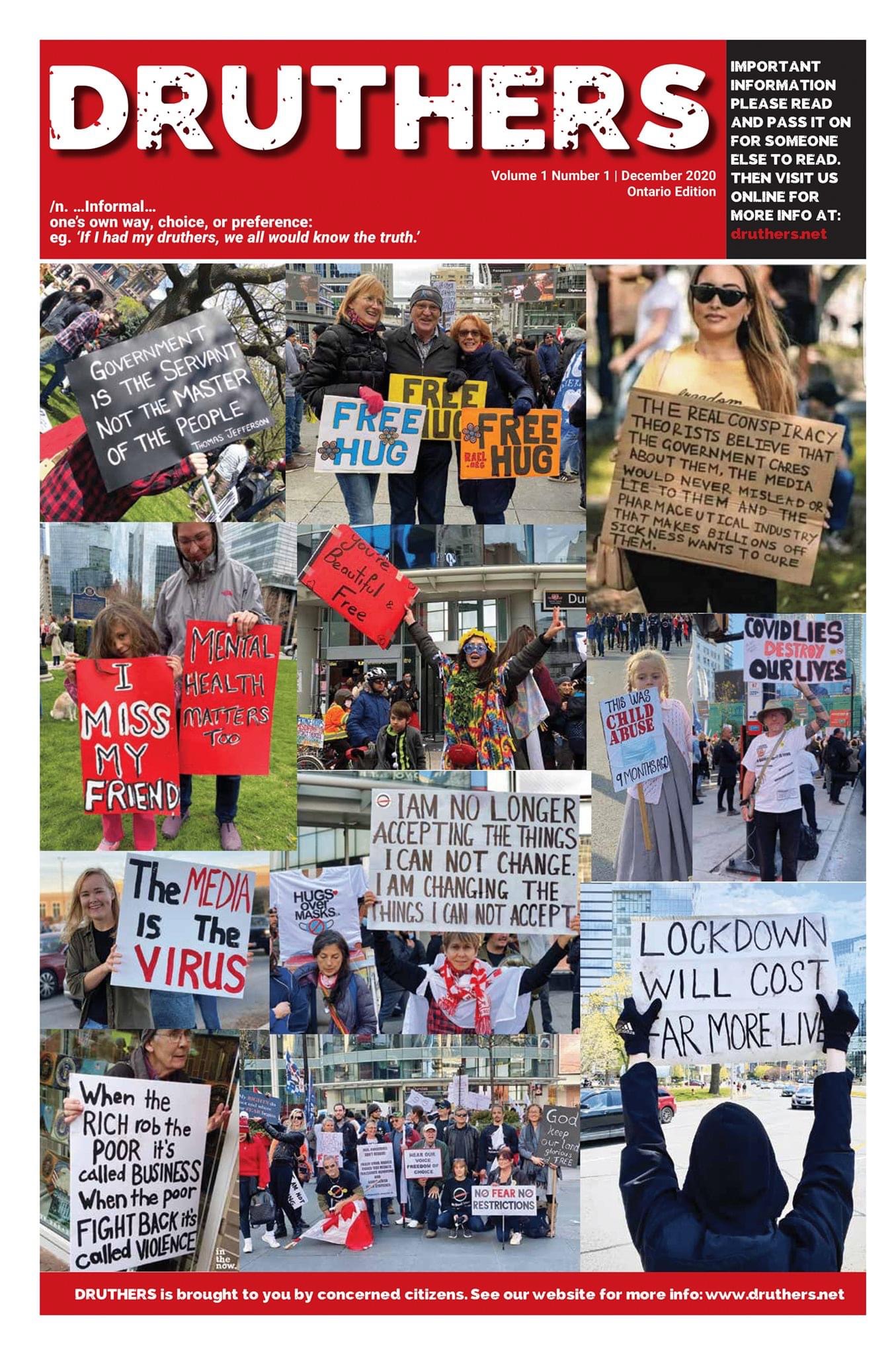 Druthers is entirely run by volunteers. No salaries are drawn from donations. 100% of donations are put into printing and distribution of the newspaper.

NOTE: We just moved from the gogetfunding platform to donorbox on January 12. For transparency sake, you can see the previous crowdfunding pages here, here & here. Those pages are now retired.

DRUTHERS NEWSPAPER IS BY THE PEOPLE, FOR THE PEOPLE

This paper is entirely funded, written, distributed & promoted by concerned Canadians like you and it would not be growing like it is without your love & support. 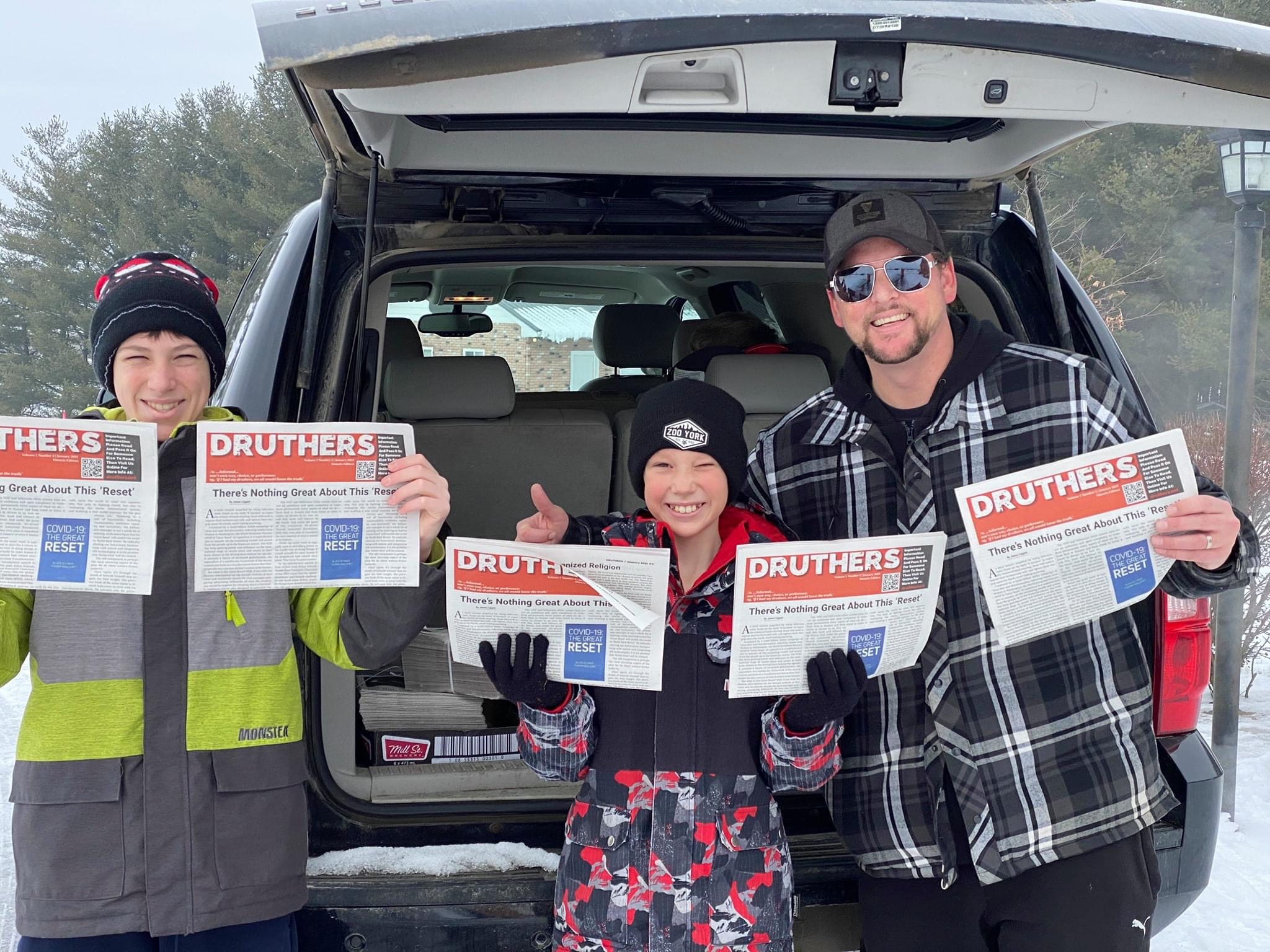 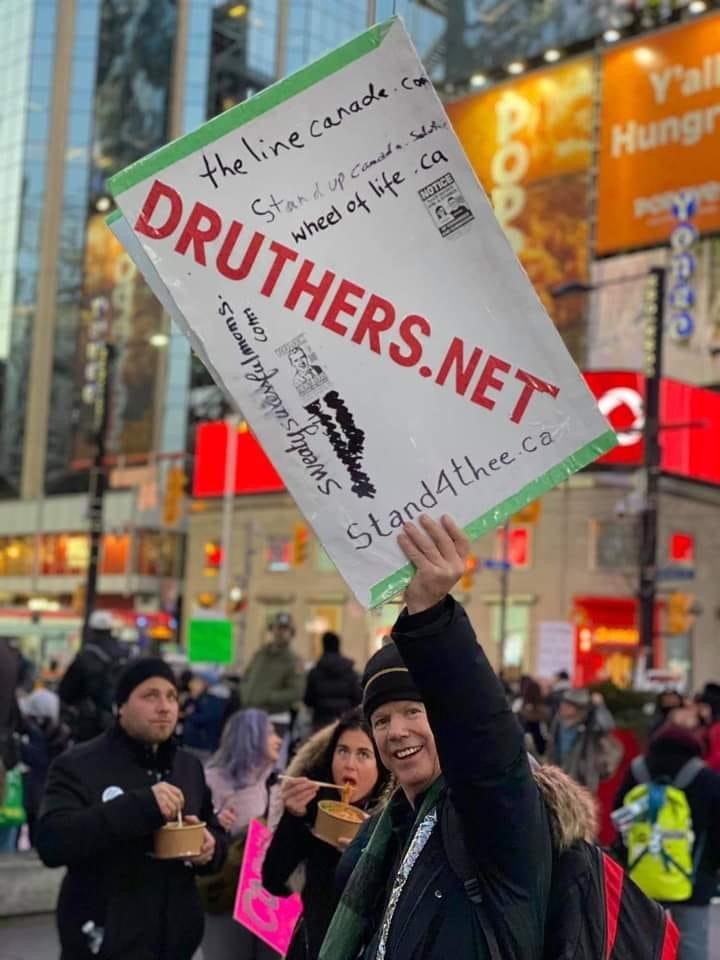 If you love what you see in this paper and believe in the importance of what we are doing with it, your help would be very much welcomed and appreciated. There are 4 main ways people can help out. 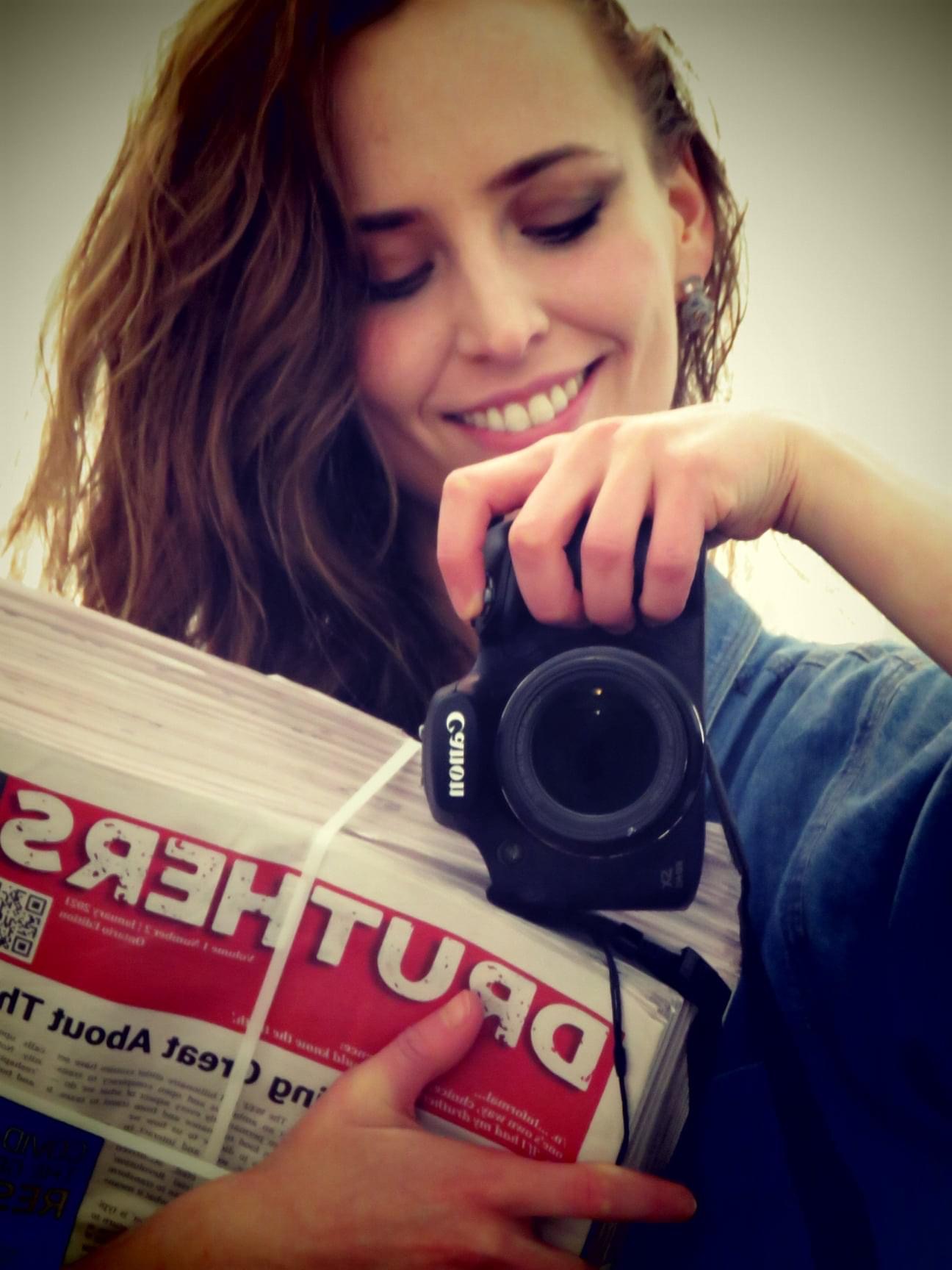 Please reach out to us at [email protected] if you would like to help. If you have other ideas on how you can help this project grow, please get in touch. We are very open to almost anything that helps us reach more Canadians, more quickly with real news & information.

Many people have stated they prefer to send e-transfers. Those are encouraged as no processing fees are taken from donations made this way. (paypal and credit cards take about 3% for online transactions)

You can use the email address [email protected] to send e-transfers. Donations via e-transfer will be added to the campaign funding total within 24 hours. Thank you.

We do offer Druthers t-shirts, monthly newspaper subscriptions, music downloads & more on our website. This is another great way to support the growth of Druthers while also receiving something in return as a bit of a thank you for your support.

Thank you. I love you. Keep on passing it on. 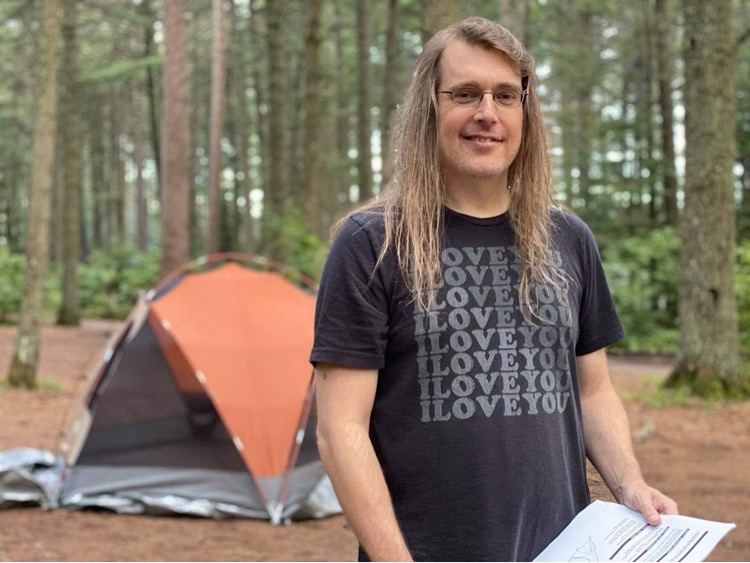