Donate
Help us by sharing our campaign!
Facebook
LinkedIn
Twitter
The Polis Project is a 501(c)(3) nonprofit organization. Your tax-deductible contribution goes directly toward supporting our contributors, our staff, researchers, writers, producers, and artists. All donations are tax-deductible. Our EIN: 82-4072305
DetailsUpdates0Donor Wall7

We need your help to continue being helpful.

We need to raise 50,000 dollars to continue our work of documenting, reporting, and amplifying remarkable voices of dissent, pay our contributors, and sustain the organization without advertisements or corporate sponsorships. 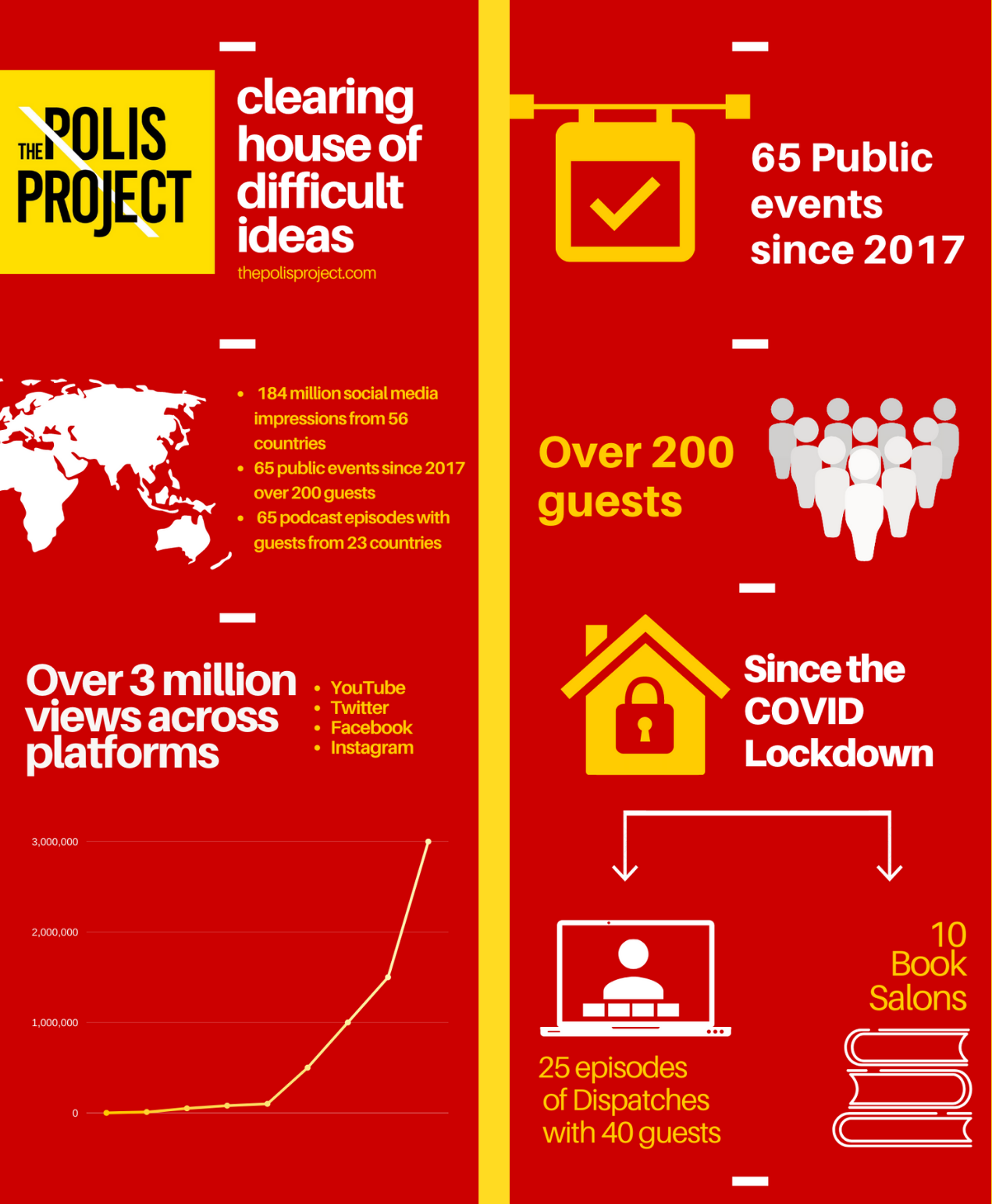 Between 2006 and 2019, 1,200 journalists have been killed while or for doing their job. This terrifying figure does not include the thousands of reported or unreported non-lethal attacks. At the end of 2019, at least 250 journalists were in jail, many continuing to be held as political prisoners.

Whenever we see our right to know, our right to speak, our right to question curtailed, we witness the erosion of democratic norms: lack of accountability, growing impunity, worsening of conflict, breakdown of State systems, and disregard for the rule of law.

Silencing those who defend democracy is the most easily available weapon in the hands of authoritarian regimes across the globe.

In May this year, at The Polis Project we started Profiles of Dissent in collaboration with maraa, a Bangalore-based media and arts collective. For the past six months, every week we have been publishing profiles of scholars, activists, student leaders, rights advocates who have been prosecuted for speaking truth to power. The idea of the series is to amplify stories of courage that are both ordinary and remarkable, to question the imposition of draconian laws used to consolidate authoritarian regimes, and to raise our voice and public attention against the criminalization of dissent.

We also published Manufacturing Evidence: How the Police are framing and arresting constitutional rights defenders in India, a scathing report on Police misconduct after the 2020 Delhi pogrom. And as part of our Dispatches, with Ayesha Siddiqa and Marvi Sirmed, we looked at the recent waves of protest in Pakistan; with architect Alison Killing and activist Aydin Anwar, we analyzed the situation in Xinjiang and the ongoing prosecution of Uyghurs.

The freedom to speak, the right to dissent are as necessary as the oxygen that keeps us alive. In order to fight the apathy that nurtures authoritarianism, we need to keep the conversation going, we need everyone to remember the names and the ideas of those who fight for those rights and freedoms.

At The Polis Project, we call ourselves the clearinghouse for difficult ideas. We work hard to make sure that underrepresented voices and communities in resistance would find a hospitable space to express themselves freely; that dissent is not forgotten; that questioning and contestation is not pushed to the margins.