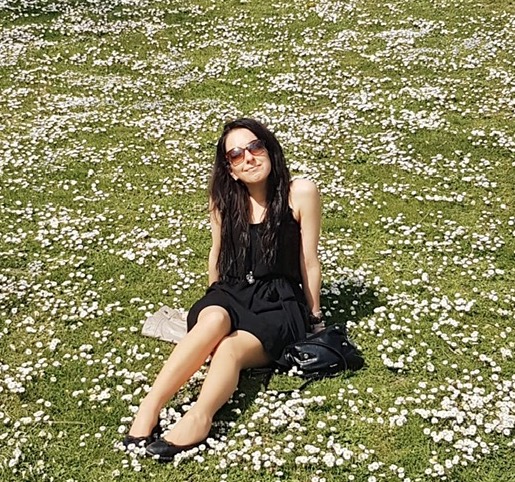 Donate for a cure for Vanessa

HOPE is a gift that you share with others.

And with hope, here I am. Two months after my 21st surgery, heading back to my hometown - and I'm on Avastin again

My name is Vanessa, and I am from Munich, Germany. I celebrated my 25th birthday two weeks ago and going by what my doctors said when I was 13, my death is eight years overdue. They said I wouldn't make it to my 18th birthday, but here I am!

I can still remember when I told my parents that my hearing was getting worse, and they only believed me because I couldn't stand the volume I used when I was watching TV. That prompted them to get me to the otorhinolaryngologist to get my ears checked, and they were completely fine! Luckily, my doctor was studying at a university in Mainz which was familiar with rare diseases. That got him skeptical that everything was OK, and he referred me to a radiologist.

One thing led to another and after a half-hour session in an extremely loud monster of a MRI machine, my results came back and my otorhinolaryngologist invited my parents and me to his doctors office after office hours.

We sat down and he showed us a picture with a hundred white dots on it. It was then I learned I had NF2, or Neurofibromatosis Type 2. A strange long word that would change my way of life forever.

After that, my first surgery was to remove a tumor from my spinal cord - not my ears. Why? My doctor explained that I needed to go to Mainz and get this mouse-sized tumor out of my spine, or I would be needing a wheelchair in two weeks.  My beloved doctor - an angel who died in that same year due to an accident - saved my life. May he rest in peace.

And that's how it all began for me. Since then, I've been trying to live a life that's as normal as can be. Of course, that's not always possible but I'm sure that I would get pretty bored after 13 years of inaction. And what have I done since then? I tried Avastin for four years; we stopped using it initially because I needed surgery, then I couldn't sleep lying down because my stomach went on strike because it couldn't tolerate the drug. I'm lactose intolerant now, but who cares -there's many cakes that I can still eat.
And then there was a radioactive infusion called DOTATATE which could've made things better or killed me, and when I tried it on an experimental basis it nearly killed me - sending me to the emergency room 12 times. I wound up forgetting how the shower at my parents house worked and was unable to put on my shoes on my own and I also became chubby and extremely depressed. However, I locked myself in my apartment and fought with myself for three days, and two weeks later I was in the city dancing in a long black dress and enjoying my life.

Since then, I think I can say that it is quite hard to kill me - I've already stopped counting after my 20th surgery. I became half-deaf in 2009 when I lost hearing in my left ear and in 2017, I became completely deaf when the doctors decided to remove the other vestibular schwannoma in my right ear to save my life; the doctors told me that the tumor had to come out or I'll be dead in six months as it was also squeezing my brainstem.

And yes, before the surgery my father made a long drive to the hospital in the middle of the night  to play his violin one last time for me, and I remember that I was not scared to hear nothing - it was very peaceful after being in a state close to a coma for four days. Indeed, I wasn't scared to hear nothing and I also remember telling my doctor that "you'll see, we'll talk again" when he told me I'd never be able to hear language or anything else again.

Thanks to modern medicine, I have an auditory brainstem implant (ABI) and through technology I focused on hearing my loved ones again - the sound of my father's violin, the voice of my mother singing her lullabies, my brother and his wonderful baby daughters. I resolved to never give NF2 the power to take this away from me and I fought, I prayed and I cried. Now every time my doctor sees me, he's almost in tears as he says "you hear so well!"

At this point I'll say yes, every operation leaves its consequences and scars, and I usually don't feel better right after. I've stopped counting the number of times I've had to use a wheelchair, a cervical collar, crutches or a walking frame until I was back in my high heels. My left hand might be pretty useless, but I have some tricks to overcome that.

Yes, I've been through a lot but all those bad things have made who I am - my experiences have made me stronger.

Indeed, I believe in karma - that if you do good things, life will give you something in return. For example, I got invited to join a cruise after my ABI was activated. It was beautiful, and I made new friends and talked to a lot of people.

It wasn't easy at first, but we have to be brave!
After that, I took my backpack and went to 7 different countries and 28 cities in a half a year. For the first time after almost 13 years, I could live free without boundaries.

I’ve learned to replace those heavy weights with wings. People always saluteme and keep asking how a little girl like me could have such a positive attitude.

My answer is simple - it works because of YOU! I've been born into a wonderful family, raised with so much love I could drown in it. I have great friends and a loving boyfriend at my side. They are always with me, no matter what fate brings or what my next decision will be!

We are all fighters, we all are brave. I’ve learned that love is the only thing that truly keep us going.

We all have loved, we all have suffered, have been disappointed but that’s life. You can’t buy your luck, luck is what you make out of life, being happy is a decision we choose to make. You can either let all the bad things and sadness overcome you or take the little gifts life makes for you and turn them into the source of your own joy. A smile, a small gesture can mean so much.

Where there’s a will there’s a way. That’s the way I live and I’m pretty sure lot of things lie in our hands. We can’t change our destiny but we can try to shape it. No matter what life takes from you, promise yourself you never forget how to smile.

Wherever life takes you, always try to make this world a better place. Maybe it will give us something back. It’s all about the big and tiny joys - you just need to see them. Don’t forget yourself and believe me when I say cake heals almost everything!

You wake up every morning to fight the same demons that left you so tired the night before, and that my love, is bravery

So, here I am, enjoying the view out of the train, thinking about that beautiful day with my family. The train gets crowded, so I turn down my ABI and let the world become a little quiet. That way I can listen better.

At the end I would like to thank all my doctors for their effort and support over the years. Over and over again I would lay my life into your hands. They are for sure “Gods in white”, with special thanks to Dr. Wahlländer, Dr. Peraud, Dr. Tropitzsch and Prof. Dr. Schuhmann

I believe that we all need to team up and fund research for NF2 gene therapy, a novel therapy that is very promising for rare type of gene mutations. Please donate to NF2 BioSolutions

Vanessa thank you for sharing your journey. Your honesty and resilience is admirable!