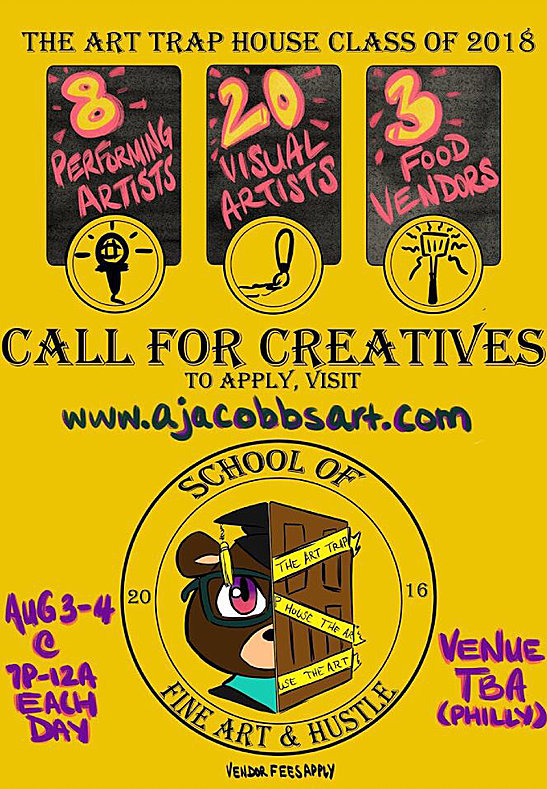 The Art Trap House is a cultural traveling art show that acts as a development platform and springboard for artists, spoken word poets, musicians, all forms of creative media, business owners, and entrepreneurs to gain exposure. TATH garners to a wider audience and connects you to other creatives in order to foster independence while developing community through networking.

The Art Trap House began in 2016 by Ms. Aja' Cobbs, 26, who is a creator and visionary herself. Since July 2016, Cobbs independently curated and produced The Art Trap House production show in cities: Charlotte (2) hosted at The Sacchi Enterprise Design Center and, Artifact Public, Atlanta (2) hosted at, City Of Ink and Gallery 992, Asheville, NC hosted at The BLOCK Off Biltmore, Washington, DC hosted at The Museum DC, Philadelphia, PA hosted at Open Space, Baltimore, MD hosted at The SAND Gallery and Austin, TX during SXSW hosted at Kenny Dorham's Backyard Diverse Arts Center. We are proud to have partnered with all African American owned venues to host our event and to present our message.

Facebook
LinkedIn
Twitter
Black United Fund of Texas is a 501(c)(3) charitable organization and contributions are tax deductible for income, gift and estate taxes. Our EIN is 74-2109039.