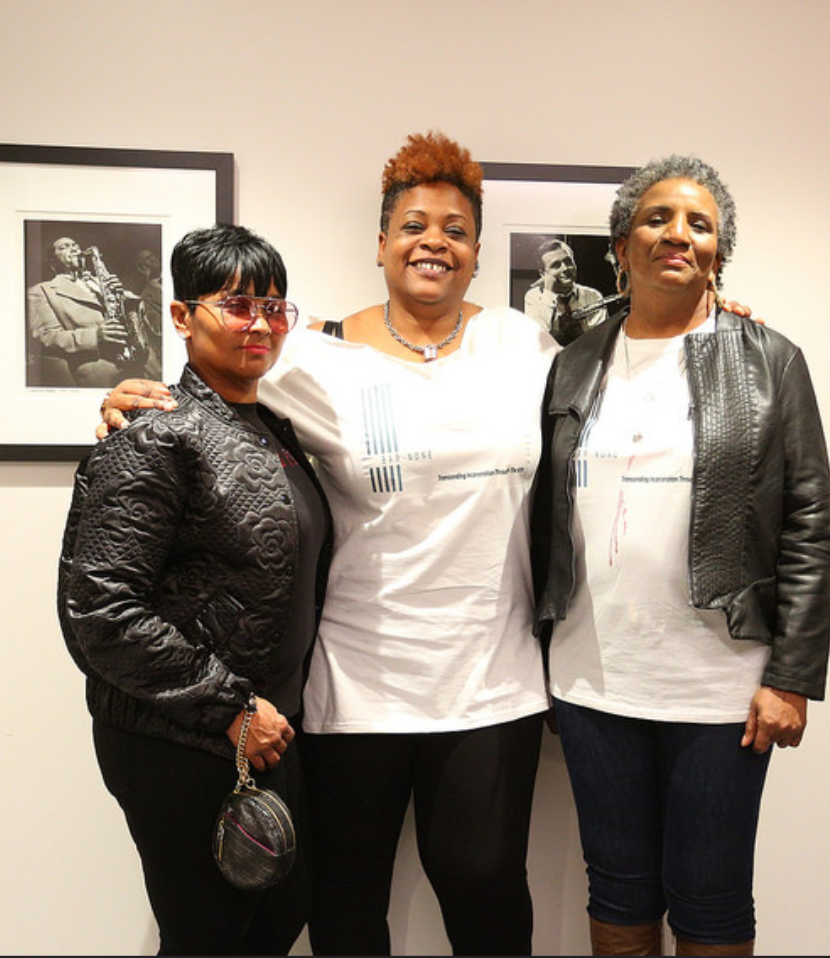 The Significance of Your Support

2020 has been a busy and challenging year for BAR NONE and 2021 will be even busier... in a great way! We are going through an AH-MAZING transformation, including a revision to our name and mission. We are also excited to welcome new board members, businesswomen Daryl Lumpkin and Sabrina Hains, businessman Melvin Williams, Dr. Curtis Davis, Dr. Rolanda West Spencer, Dr. Elizabeth Jeffers to our Board of Directors as well as new, Co-Executive Director, LaJoan Williams! We are also celebrating board member Asali Ecclesiastes in her new role as Executive Director of Ashe Cultural Arts Center as she will be taking the reigns in January; Advisory board member, Danielle Metz on her up and coming documentary and our Residency Program Director and first Artist in Resident, Mrs. Sheila Phipps, on the opening of her new art studio and gallery!

Review of Our Work

4) our Executive Director served as one of the Key Note speakers for BARD Early College College and Dillard University's Symposium of Scholars ask "What is Justice?" 2019

9) our Executive Director was honored by veteran educator, Brother Jamal Robertson, and all of his classes and rewarded with a plague for her continued committed to coming to facilitate interactive, engaging workshops with them on education, incarceration and being Black and Beautiful as part of BAR NONE "With Intent to Prevent" Keeping Youth Youth Measure

10) partnered with 5 local organizations to host the 1st ever before they announce, "Education & Incarceration: What's Your Campaign?" Happy Hour attended by 13 candidates running for various roles of service

11) partnered with Ta-Nehisi Coates team to get his new best seller, The Water Dancer" to those we serve who are currently incarcerated and are apart of our book club

12) brought on our Co-Executive Director, Ms. LaJoan Williams, who brings a wealth of knowledge and experience from the business world to our table and we are excited to have her serve with us

13) our Co-Executive Directive, Tuere Burns, addressed attendees as a panelists and speaker during the UCEA (University Council for Educational Administrators) in New Orleans; one of our board members, Dr. Jeffers, is responsible for Ms. Jones' being apart of this and her UNO PhD students organized one of the panels Ms. Jones spoke on.

15) on Dec. 14 and 15 will be hosting our 1st Annual Christmas Toy Giveway for children in the Carrollton, Central City and 7th, 8th and 9th Ward communities

!6) still in the fight to FREE MAC

If that's not enough, we have 7 reasons for you to give for this #GivingTuesday, December 3rd, 2019:

February 21st, 2020, will mark 20 years that former New Limit Recording Artist and BAR NONE advisory board member, McKinley MAC Phipps has been incarcerated for a crime that he did not commit.

Designed to educate the community on MAC the man, musician, and creative genius, BAR NONE has identified 5 visual artists, one who is MACs mom and our Residency Director, Mrs. Sheila Phipps, to lead this local project, painting 20 murals around the city of New Orleans, while those who know MAC best will facilitate workshops with youth-based organizations engaging them in MACs music, the positive impact his artistry has had on the outside world as well as those currently incarcerated and the necessity for criminal justice overhaul as there are, or have been too many MACs in the system or those with sentences that don't fit the crime.

The youth will then meet with the visual artists and complete the murals together!

The long standing hashtags will adorn the mural as well as the information for the petition at https://www.change.org/p/bar-none-freemac-mckinley-phipps encouraging supporters to go sign.

We are committed to seeing MAC FREE in 2020.

August "Gerttown" Williams served 50 years in the Louisiana State Penitentiary (Angola State Prison when he first entered as a child) for a rape he did not commit. 2 expert witnesses (doctors) gave testimonies confirming he could not have committed the crime he was accused of because at the time he had gonorrhea and the victim didn't nor did the spermicide found inside the victim match.

He was arrested at age 15 and sentenced to the electric chair at age 16. A law passed that saved him from the chair, however, giving him life. Another Law passed more recently that allowed him to come last year but keeps him like so many others, confined to the penal system via parole for the rest of his life, paying into the system and registering as a sex offender.

We contend that Gerttown as he is affectionately called, is innocent and we will continue to work with him to clear is name by telling his story, also connecting it to the current injustices and ills that we still find in the juvenile system as it intersects with the system responsible for pushing our children out of schools as opposed to educating them and making it hard but not impossible for healing and wellness to exist in the Black community specifically.

By design, this is what makes up the Prison Industrial Complex and by DeSign we will make it obsolete.

August "Gerttown" Williams served 50 years, from age 15 to 65, in the most cruelest, largest prison in the world, for a rape he did not commit. Because he was snatched from his family, there were no more family gatherings and celebrations for him, not even for his birthday. Since coming home in late October of 2017, he was given a small party by friends and family in the community where he was born and mostly raised before being ripped away from them. Not all were able to attend.

Moving forward, it is our hope, that with your help, Gerttown receives a Birthday Party every year! We know if won't make up for the 50 years he lost do to this broken system, however, we are hopeful that we are able to give him some jubilant satisfaction once a year so he knows that we care and won't ever have to worry about celebrating his Birthday without his family and friends again!

The End of the Money Bail Racket

We have teamed up with VERA Institute for Justice and Beyond to bring the issues of money bail directly to the community.

Educating the masses in lay terms on why we Louisiana should remove the money bail system is imperative to their pockets and purses. Their voices should be heard and ideas and suggestions taken seriously on how we can partner on ensuring elected officials listen to what their constituents want and not the lobbyists who line their

A few months ago, we started a book club mainly just discussing books that we read via sporadic phone calls/ emails when able (it's really expensive to do either). Now that we received a huge donation from famed, best selling author, Ta-Nehisi Coates via his publisher (Nicole) of his new book, "The Water Dancer", we want to get the books out to those who are apart of our book club and have a more organized approach to our Literacy program.

We plan to be in communication twice a month via internet about the book we are reading at the time and at the end, hosting a writing campaign of instead of email to each other about our overall thoughts on what we've read. In addition, if the author is still among the living, write her/him a letter with our collective thoughts and if they have transitioned, write the letter still and put it on a box.

Your donation would absolutely be helpful to us to ensure we get the books out to the facilities that we have to mail, internet, and writing supplies.

We have recently secured partnerships with 2 juvenile facilities in Louisiana and 2 adult facilities and will be securing more age appropriate books.

*All books are pre-approved through the department of corrections.

There is so much conversation and energy that goes into intervention that society doesn't focus on how much of it can actually be prevented. And although there are times when intervention is absolutely necessary, and there is no other alternative but to intervene, so much of what young people get themselves into can be just as easily prevented. As parents, educators, activists, community members, we recognize, remember, and understand the importance of the tribe, We know that without us there is no them. A simple hello goes along way with a child so imagine how far a conversation can go or showing interest in what they're interested in, even if you disagree. A healthy debate makes for an inquisitive mind and someone who is self-determined to learn more and teach even more. Servant Leaders. We have been able to do this in spaces as small as one on one and as large as 25 to 1. There is no such thing as too little or too many when referring to young people in general and Black children specifically because they are the ones whose lives are at stake.

The state of Louisiana locks up children as young as ten years old. In New Orleans, most of those children are Black males and most of those arrest are school-based. As a liaison, we assist schools, parents, and more importantly, the child, who is the one that is supposed to be met with compassion first and counseling as an alternative, not prison.

What we do matters because children matter most to us. Those same little people will be responsible for our way of life sooner than we think. Right now we have the opportunity to be on the side of humanity and guide them because we love them.

Co-authored and directed by veteran visual artist, Mrs. Sheila Phipps (yes MACs mama), she was actually our 1st artist in resident. With a few changes made, we are hoping to launch something bigger that will allow for our artists to go from masters of their crafts to business persons and teachers, returning to serve with our organization, bringing others along.

Like any nonprofit organization, we can always use help with our overhead expenditures. Although we don't do this for the money (trust us!, LOL), we won't pretend that we don't have personal and professional bills and obligations like everyone else. We may be small, but we pack a mighty punch and it takes alot to make the dent we do. Any amount helps. We appreciate it!

BAR NONE is grateful for the support of our fiscal sponsor, Don't Even Trip Dream Foundation is New Orleans-based, 501(c)(3) organization whose mission is to use their power of influence through entertainment to make a positive impact in communities.

Please sign the petitions for both MAC and GERTTOWN.

Thank you in advance and we look forward to your continued support of BAR NONE!

Facebook
Instagram
Twitter
Every donation is made tax deductible  via our fiscal sponsor, Don’t Even Trip Dream Foundation, a local nonprofit, whose mission is to use our power of influence through entertainment to make a positive impact in communities.
Facebook
LinkedIn
Twitter
Choose amount Information Payment       
We are humbled that Don’t Even Trip Dream Foundation serves as our fiscal agent, EIN, 27-3570135. All contributions made here tax deductible. No goods or services have or will be provided in exchange for your generous contribution.
Facebook
LinkedIn
Twitter