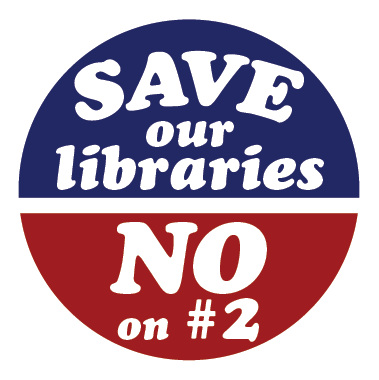 Save Your Libraries! Vote NO on 2!

I was surprised to learn how little money the New Orleans library receives compared to other municipalities in Louisiana, and yet NOPL services are second-to-none, the staff do a top-notch job, and the buildings are accessible and well maintained. In New Orleans it's one of the *few* public services that runs efficiently and makes you feel proud. Proposition 2 is an obvious money-grab. The new library Director and the City Council are being dishonest about the impact this massive budget-cut will have on our community--and they know it! The Mayor is being intentionally vague on how she'll re-use the library's funds (maybe she'll pay her back taxes). The library is the only service in this city that actually works, and works well, and has a noticeable and positive impact on the quality of life here. It makes no sense to undermine this great institution. If money is tight elsewhere and we need a better budget, then let the Mayor have an honest discussion with the people. Until that happens, I'm voting to save our libraries!

There is never a good time to cut funding for education and community services. Stand up for your citizens, New Orleans! This is our money and our community.

Libraries saved my life as a child from a working class family with little money for extras like books. I read all sorts of stuff at my local library plus now it’s one of the few places to get free access to the internet. Thanks to all those working on this campaign!

I'm a historian and I would not be able to write the dissertation I'm working on without the Louisiana/City Archives Collection at the New Orleans Public Library. Libraries preserve local history and culture in addition to the myriad services they provide for residents. God I hope this proposition fails.

The NOLA Public Library MUST NOT BE cut, if anything, we need to redirect resources to increase the budget so that the library can continue to serve all of the citizens of New Orleans.

There is a large swath of current city expenditures that could use austerity, but the New Orleans Public Library System is one such byline that should actually be getting *increased* funding! This proposed draconian slash must be defeated December 5th!

Our libraries are vital for leisure, learning, and access for the general public. Glad to see people standing up to those slashing of the library's budget and showing that we want our libraries with all their allotted services. Let's push back and protect our libraries!