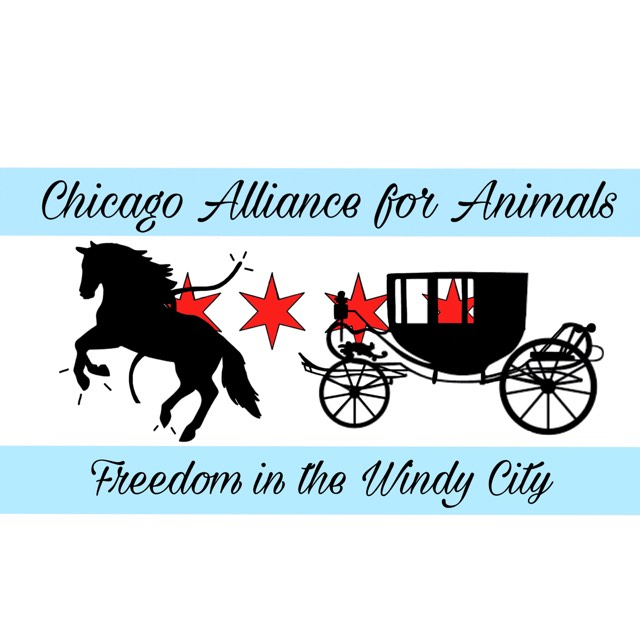 Once again, the progressive and common sense bill to ban horse carriages in Chicago was blocked last year despite having 26 official co-sponsors and 32 Aldermen who told us they support the humane measure.  It appears our new mayor refused to allow it to be heard or voted upon after many months of showing her how often the horses are overworked, not provided water often and worked when it’s too hot (from volunteers routinely documenting horses in the heat, the cold, the wind and the rain).  Don’t worry though, the Chicago Alliance for Animals (CAA) is regrouping to finally ban the cruelty in 2020!

In addition to our hard work on the horse carriage campaign, we accomplished much more.

For at least two decades, a town in North Carolina has been dropping an opossum from a plexiglass box as fireworks and muskets are fired into the sky and loud crowds cheer on this inhumane excuse for New Year’s Eve entertainment.  This was their version of the ball drop in New York City. Advocates have been trying to ban this for many years.

Then the Hancock Volunteer Fire Department in New York was planning their 2nd annual coyote hunt tournament for this month.  So last Saturday, I posted a DAA urging our members to urge Hancock's Mayor, officials and tourism outlets to stop this barbaric event and let them know that there are plenty of great ways to raise money that don't involve harming and killing animals and that firefighters should be saving, not taking lives.

I’m not saying CAA did this alone, as there were petitions for both, but I’m certain that our calls and messages made a big difference.  And every day, more and more people are participating in CAA’s simple and quick form of peaceful activism that requires little effort, but which makes a big impact.

Additionally, CAA had a hand in getting the woman, who ran EARTH Animal Sanctuary, ARRESTED ON CHRISTMAS EVE. MORNING ON CHARGES OF AGGRAVATED ANIMAL CRUELTY.  Myself and five other dedicated animal advocates have been working for a year with the Iroquois County State’s Attorney to bring justice to 700 (give or take) animals who’ve disappeared from the property and who are presumed dead.  An Iroquois County grand jury had previously returned a one-count indictment against the 38-year-old Will County resident, alleging she “intentionally caused the death of multiple companion animals, including dogs, cats, pigs, rabbits, birds, goats, raccoons and turtles.”  We will be attending the first court hearing on January 23rd and we’ve planned a vigil for afterwards.

We had some other awesome successes in 2019 including:

July 2019 – Every summer, Chicago’s Taste of Lincoln Avenue featured pony rides and camels in the children's section of the festival.  One of CAA’s volunteers, who lives near the fest, alerted me to what she routinely witnessed including:

-Animals forced to walk in endless circles in scorching heat

-No water available or breaks for the animals

-Animals located next to the CTA’s elevated train, which was likely extremely jarring

LAST YEAR, THERE WERE NO ANIMALS BEING EXPLOITED AT TASTE OF LINCOLN AVENUE!!!

June 2019 – Chicago’s Puerto Rican Fest routinely had animals (horses/camels) at their fest, but after doing a couple DAA’s on the issue, the Executive Director of the fest wrote the following to me,

“WE WILL MAKE SURE THAT IN THE FUTURE WE INCLUDE A CLAUSE IN THE CONTRACT THAT NO ANIMALS BE BROUGHT TO OUR FESTIVAL.”

I’m writing this to ask you to please consider becoming a regular, monthly donor to CAA.  I spend hardly any money doing this daily work – there are no salaries, no overhead costs, no office, no company vehicle, no benefits, no expensive mailings, etc.  A $15 or $10 monthly (only $180/$120 a year) gift will help me build up funding, so one day I can work on CAA full time.  Unfortunately, I still must work another job to pay my rent.  If I could work on animal protection full time, I know I will make a much bigger impact!

Many thanks for reading and for your time and consideration, and please don’t hesitate to contact me with any questions or concerns!

Keep up the great work you are doing, Jodie.

The accomplishments and dedication of Jodie and Chicago Alliance for Animals deserve our support!

Love doing actions with CAA! Thank you Jodie and team for all your dedication!

Keep up the awesome work ! ❤️

Finally no more horse carriages in Chicago’s busy and loud streets. All thanks to Jodie for her relentless work. Chicago thanks you