Help us Stop the NLRB from Rigging the System!

This is a case of whether a random person on Twitter can claim ‘unfair labor practice’ because a Tweet did not sit well with them. Individuals who are not directly impacted by the consequences of a comment on social media should not be allowed to co-opt the muscle of the federal Administrative State to bring frivolous charges, but that is exactly what happened here.

A tweet in jest by Ben Domenech a co-founder and publisher of FDRLST, Media, L.L.C., which publishes an online magazine The Federalist, resulted in the filing of a formal charge with the National Labor Relations Board by Joel Fleming, a random Tweeter— completely unrelated to The Federalist or its employees.

Armed with this misguided charge, NLRB subjected the FDRLST to an onerous enforcement action that the agency lacks the jurisdiction to pursue. 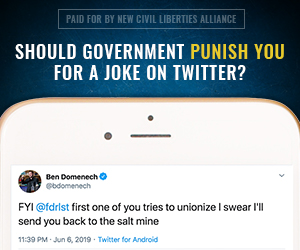 In this case, the NLRB interpreted an “aggrieved” person to mean any person. This creates the opportunity for anyone —including someone completely uninvolved—to abuse and weaponize the NLRB’s investigatory processes against others with whom they disagree.

Recently, a judge appointed by the NLRB ruled in favor of the NLRB. That is the very definition of a system rigged against non-government litigants! NCLA is representing FDRLST Media to insist that the NLRB limit its enforcement jurisdiction to the complaints of employees actually aggrieved by an alleged unfair labor practice.

This could happen to anyone. Will you help us win the case against government overreach at the NLRB?