1) What does StacheStrong mean to you and how do you #LiveStacheStrong?

The past twelve months have been difficult ones for the Vestal High School Class of 2007. We have lost three very good men to medical conditions much - if not completely - out of our control. That, as you know, is a pill too hard to swallow. It renders you helpless, confused, and quite honestly, angry. As I think back to our high school days and specifically our senior year, I am fortunate to have such fond memories.  But back then we all felt so invincible; like we could do and say whatever we wanted and nothing bad would ever happen to us. As far as we knew, we had our entire lives ahead of us, and none of us cared where they were going or what would happen. We just knew we could do anything.

Now, to 17-year-old Elisabeth, that meant I could drive faster than I should have, overstay my lunch period at Nick’s, walk into Mr. Carr’s IB Econ late and not get in trouble, and wear ridiculous costumes on a stage in front of my entire cohort during Talent Fest. Silly things. Largely inconsequential things. But what I am willing to bet none of us realized was that the mindset of “we could do whatever we wanted” would take hold in some of us and serve us in a much greater purpose as we grew up, matured, and finally started navigating what life was going to look like for us post-'007'. So what does “we can do anything” mean to 30-year-old Elisabeth? I'm glad we asked..

To the older, single mother-of-two, full-time-job and by all means boring Elisabeth, “we can do anything” has come to mean “never give up”. (I know what you’re thinking: she started so strong in her intro but then gave us the most cliche phrase possible. Hear me out - I swear it’s more than an adorable cat hanging from a tree branch in your doctors office.)

To me, StacheStrong at its core is never giving up. It is seeing the battle that is in front of you, putting your head down, taking a deep breath, and seeing it through. Not because there is any reward or glory, but because it is just what you have to do. Living StacheStrong means being a warrior. Not for recognition or attention, but because there is a fight that needs to be fought. Maybe you are fighting the battle for yourself. Maybe you are fighting the battle for someone else. Maybe it’s both. But by the grace of God - there I go.

No matter what the outcome be - never give up.

Everybody has a struggle. Everybody is going through something. I #LiveStacheStrong by taking my own personal struggles and experiences with hardship by turning inward to myself first, finding what little strength I don’t think I have left, and then I turn to those in my life that inspire me. Those that say to me “you don’t have a choice, you have to keep fighting”. Those that say “if I can do this - you sure as hell can do this”. Those that say “go ahead. Give up. That’s what we’re all waiting for”. I #LiveStachStrong by fighting the fight, every single day, even when there is no fight left.

“Carry your aliveness around like flowers, and scatter the seeds across so many miles and so many trails that others will see them along the way, so they too will remember how to bloom”.

Simply put: just be like GJ. See the battle in front of you, put your head down, and carry on. And try have fun every now and then. Never give up.

2) Why are you personally running?

I could give you a lot of reasons why I run. It has evolved over the years to a point where I have truly found my place, but it all started back in August of 2006 on the VHS track. I was running a speed workout with the legendary Jim Cerra to prepare for my senior spring lacrosse season. It would be my final, and I had a few colleges to impress.

Up in the parking lot behind the bleachers, the men’s Cross Country team was finishing their preseason workout. GJ was up there and he came down to the track after to say hi.

GJ: “You should run cross country! You’re kind of fast and the women’s team could use another runner.”

GJ: *rolls his eyes and let out an amused sigh* “Whatever you want, Eli”.

Later that night, he sent me an AIM (GJtheJet5, if I remember correctly?). “Talked to Fancher - you’re in. Come to practice next week. Welcome to the team”. Although it was probably something far less grammatically eloquent, considering AOL Instant Messenger wasn’t exactly where we went to practice our English language skillz.

While I admittedly didn’t last the whole season, I enjoyed enough practices making pit stops at Weis to grab snacks mid-run, t-shirts with pink puffy paint with our favorite wildly inappropriate inuendo’d sayings (“XC runners like it long and slow”), bus rides to whichever golf course we were running at, but my most favorite: pasta dinners at GJ’s. I didn’t have the privilege of too many of these, but here I was, a “new runner” (I was only doing it to keep in shape for lacrosse, I swear!), making new friends I still to this day keep in touch with, watching Without Limits, and eating some of the best pre-meet food I would ever have (thank you, Gerners!).

I never considered running for the sake of running. I always used running as a means to improve the other team sports I was playing. Fast forward to today, and my running career has evolved and become something I never thought it would. That is - honestly - because GJ told me I was kind of fast and should give it a try. Thank god he did (Gary Fancher is undoubtedly still cursing GJ for that decision).

Today, I run for me. It’s so much more than what I will put in words here, but I’ll give it a shot. I made the switch from roads to trails about 2 years ago when I was going through my own personal what-have-you, and never looked back. Running keeps me alive and makes me feel more alive than anything else. It is just you, the woods, the trails. It’s primal, and it’s the perfect marriage of human and nature. It’s where I feel most at home. I started running ultramarathons when I wanted to see how far I could push myself and my body. To find my limit - and then push through and beyond. To seek out the struggle so that I could become a stronger version of myself. Sometimes, I run because I don’t know what else to do. But I always run because...I just love it.

I want to run the NYC Marathon with the StacheStrong team - but honestly, I don’t care what race it is. I want to represent this team, this cause, and GJ. It is the only way that I know how to humbly honor a life that was lived in the most spectacular fashion. Running is the only way that I know how to authentically thank GJ for his time in my life, for being a friend, and for just being a good human. To toe the starting line, the same way he has done so many times, to hear GJ tell me one more time: “hey, you’re kind of fast, give this a shot”, put my head down - and remind myself that this is what it means to be alive. 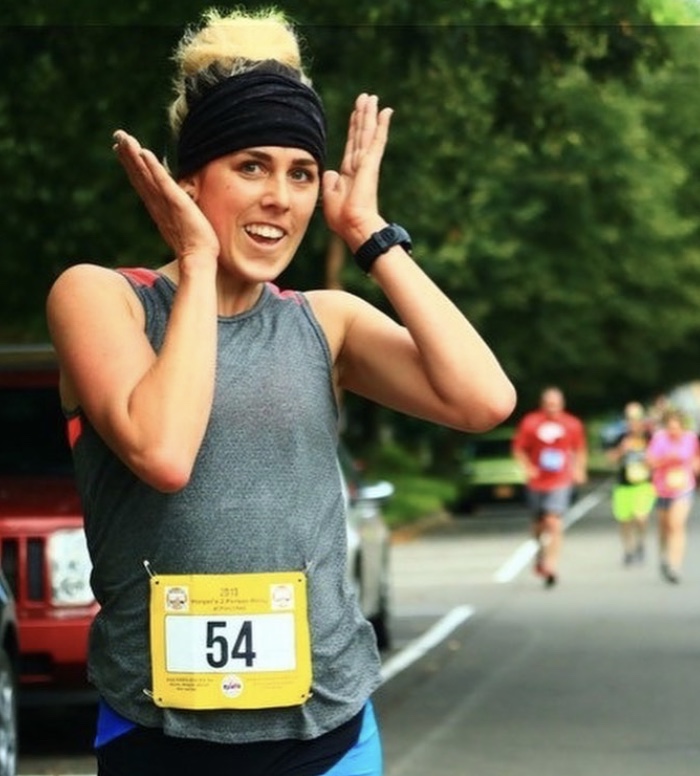