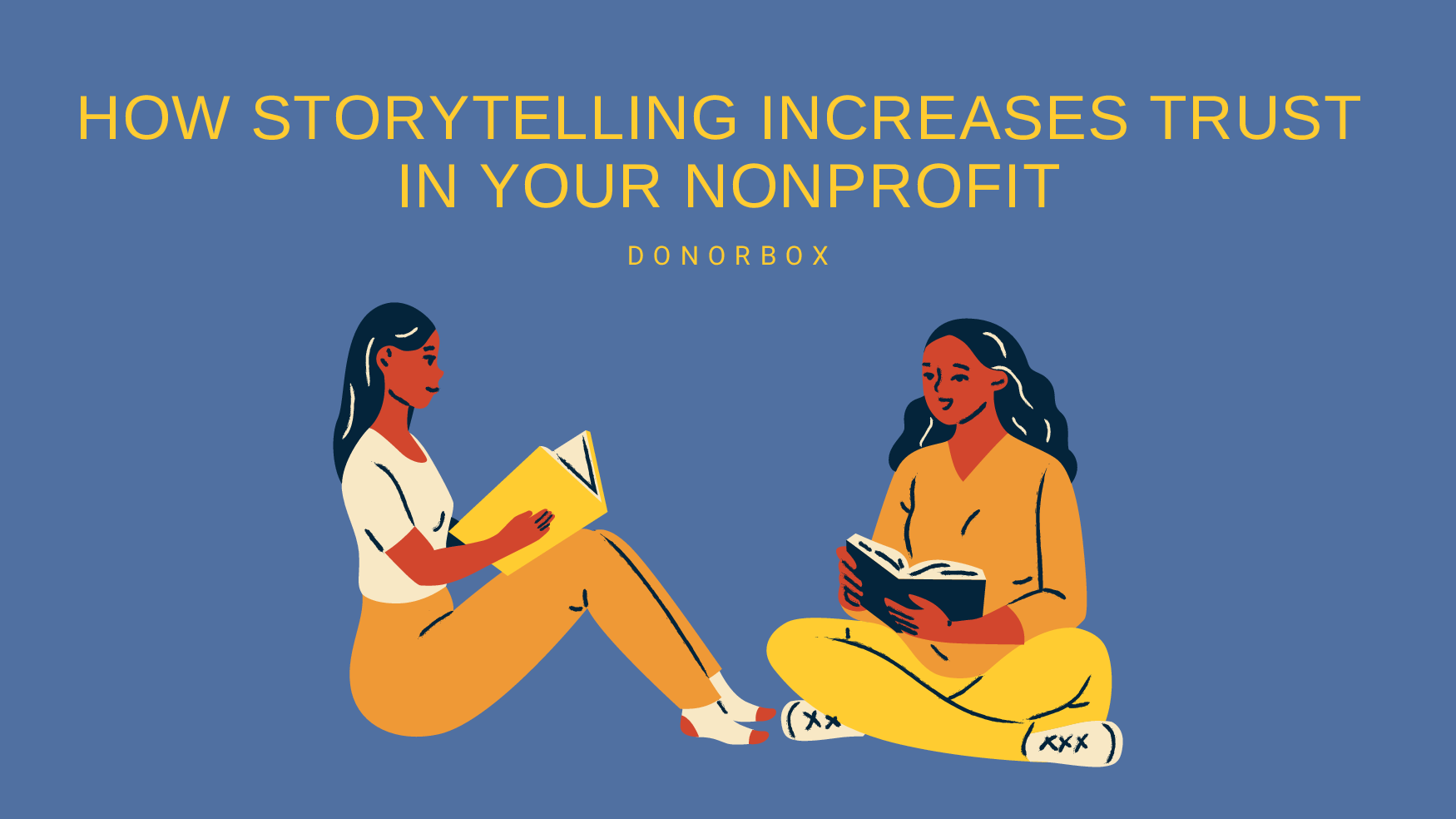 How Storytelling Increases Trust in Your Nonprofit

One of the biggest issues for charities in 2021 is increasing visibility online. While street donations remain the most popular way of contributing, online donations are slowly gaining ground as the dominant channel.

As many charities struggle to adjust to changing realities, visibility on the web remains a challenge.

However, there’s an even bigger challenge for charities operating online — one that no amount of clever advertising and social media marketing can change. Because of an overwhelming number of new charities popping up, people are losing trust in them.

Barclays’ report finds that lack of trust is the second most common reason for not contributing to charity. Saturation has made trusting and choosing who to donate to more difficult than ever.

It seems that intrusive online ads have also made marketing more difficult for everyone. According to a recent Nielsen marketing report, only 46 percent of people trust social media ads. The figure falls by a percent or two every year.

How do you build trust then? Releasing your NGO’s financial information is a great start. However, it takes a bit more than that to foster a community of donors who trust your charity.

You should absolutely make the financial aspects of charity transparent in your organization, but you should not forget how people think. They do not intuitively trust numbers. They trust stories. This is why incorporating storytelling in your marketing and general messaging is paramount for gaining and keeping recurring donors.

Change the World With a Story

When it comes to communicating your NGO’s impact in a fast and compelling way, there’s nothing like a good story. To make sure your effort pays off, follow these five simple steps:

There is no perfect formula for every story. You will have to add things to eventually create a formula that consistently works for you. But starting with these steps helps ensure that your audience is compelled by the stories you choose to tell.

A rational-minded person might think it obvious that people trust data. After all, people can lie, and numbers aren’t capable of such treachery. But this worldview doesn’t take into account one simple fact: Humans did not evolve to understand mathematics and graphs. We evolved to understand stories. It’s how we passed down the lessons learned from previous generations for millennia. 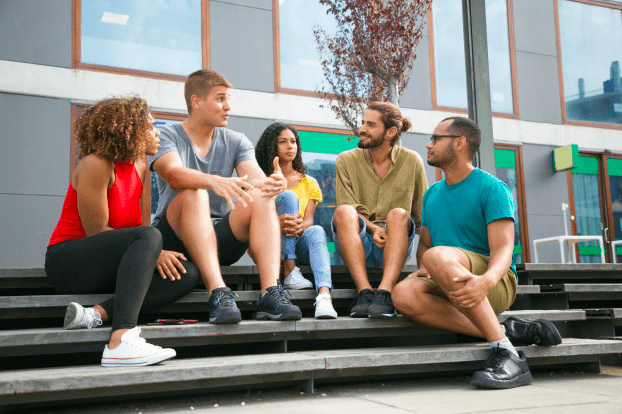 Dan Kahan’s research for Yale Law School shows people may not even trust scientific data that can be cross-examined if they don’t trust the source. No wonder people lack trust in online advertising when even scientific facts can be distorted through poor communication. Some experts like Daniel McAdams even say all people understand the world they live in by crafting stories, whether they’re based on facts or not.

There is no clear data on why people trust stories more, but there are a lot of theories. Lise Saffran, a professor of public health and storytelling at the University of Missouri, shares one such theory: We love stories because we want to feel the company of another human.

She quotes Frank Conroy on the issue: “When readers are told that the perspective of the person telling the story doesn’t matter because the story consists of objective facts, they increasingly suspect they are being lied to.”

The writer’s insight actually holds true. This experiment from the Journal of Neuroscience looked at three groups of people who played a trust-based game with a computer algorithm. Only one group was told there was a computer on the other end of the screen. The second group was told it’s a human, the third — it’s a close friend of theirs.

Both of the groups that thought they were playing with a human showed a more trusting behavior, the third group being the most generous. These findings are also supported by a common trend in advertising: When users see a response they believe is automated, they lose interest.

Trust is a very personal thing. As we interact with people who are close to us, we learn to generate oxytocin, the so-called “love hormone,” when we see them. 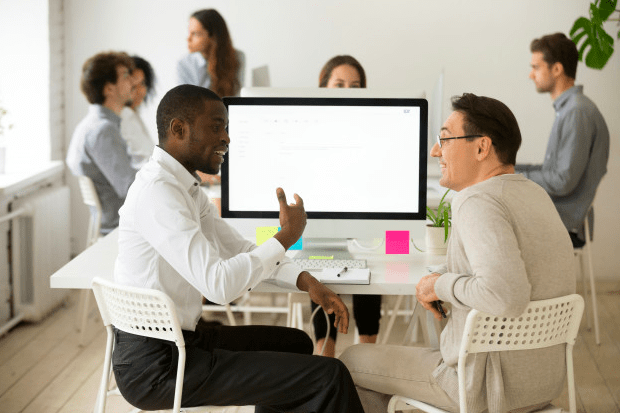 The same hormone prevents us from trusting outsiders. But this study from Nature by Michael Kosfeld shows that giving people oxytocin makes them more trustful in general. One of the co-authors of this study, Paul J. Zak, later published research that proves without a doubt: storytelling produces oxytocin and builds trust.

This correlation is so strong that, as Berkeley’s Dacher Keltner points out, good storytellers in politics receive more support for their bills. Storytelling can literally change the world if you look at it this way. It can help nonprofits, too. People with higher oxytocin levels are 56 percent more likely to donate to charity.

But to harness the full power of storytelling, the message must be touching. It must evoke a lively response from the reader. It must be effective.

How to Write a Compelling Story For a Nonprofit 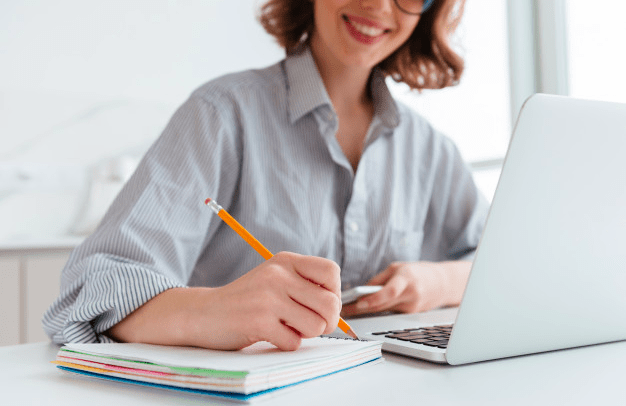 There are multiple ways to tell a story. You can do it in a long video presentation, an article about your charity’s achievement, a page on one of your charitable efforts, or a short video advertisement. No matter which medium you choose for your story, it has to do these five things to effectively reach the reader:

Since many charity leaders treat their endeavors as personal, it’s common to see storytelling that is centered around what an organization does. That’s what your donors want to see. They want to see how the world is becoming a better place. They want to see a story about your actions changing people’s lives — not one that simply glorifies your actions.

How do you do that? Take advice from a man who has been involved in charity for more than 20 years: Craig Kielburger, the co-founder of WE Charity. He advises you to find a character that will become the focal point of your storytelling.

WE Charity messaging involves a lot of storytelling, both in videography and in writing. It does feature some statistics and goals of the organization, but it’s not what makes the content compelling. In most of their stories, it’s a person the organization has helped who is conveying the story. 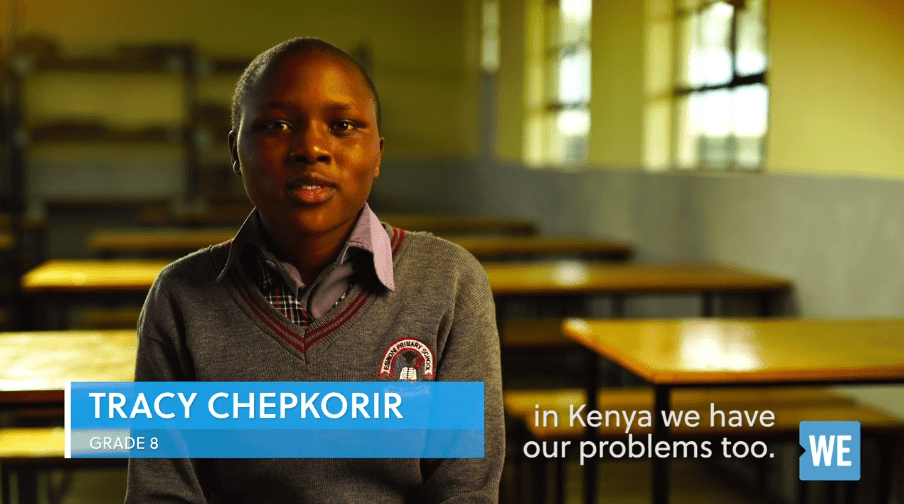 This kind of human connection is what’s lacking in a lot of modern advertising that people dislike.

So we know that storytelling increases oxytocin, the hormone related to trust. However, this experiment shows the hormone is only released after a continuous attention spike. This means you need to grab the donor’s attention if you want your storytelling to be effective.

One of the main methods of retaining a reader’s attention to a story is to create tension, put pressure on the pain point, mention the problem that your characters are facing, and make the stakes clear. 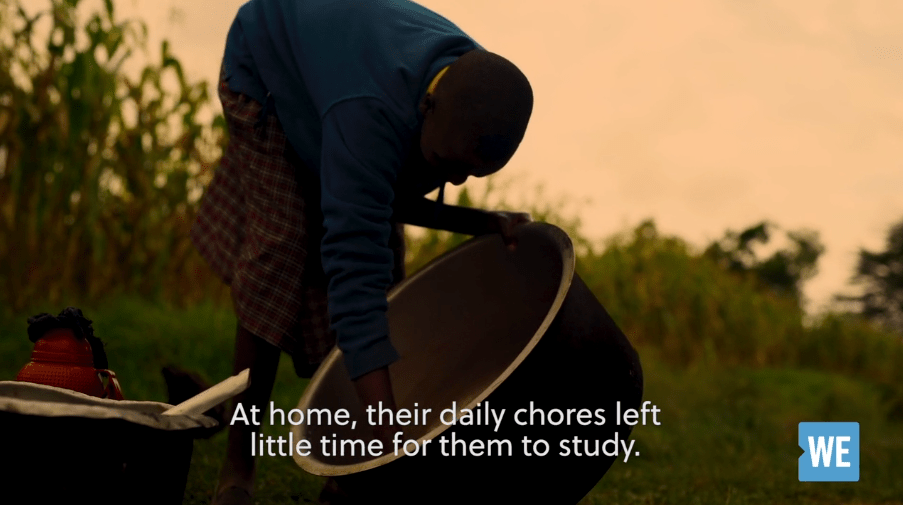 In your case, it may be as trivial as students not having enough time to study at home because of food insecurity — something unfortunately common in many developing countries. It can also be much more serious.

Even if the problems are not apocalyptic, showing the obstacle upfront should be enough to hold your donors’ attention.

3. Show agency that leads to change

Dacher Keltner’s research on storytelling shows that narratives of superiority irritate people. Stories that show the underdog changing the world despite those in power receive a positive response and move people.

A good story, in his view, adheres to Joseph Campbell’s understanding of the hero’s Journey, a shorthand term for stories about an adventurer who transforms themselves or the world. 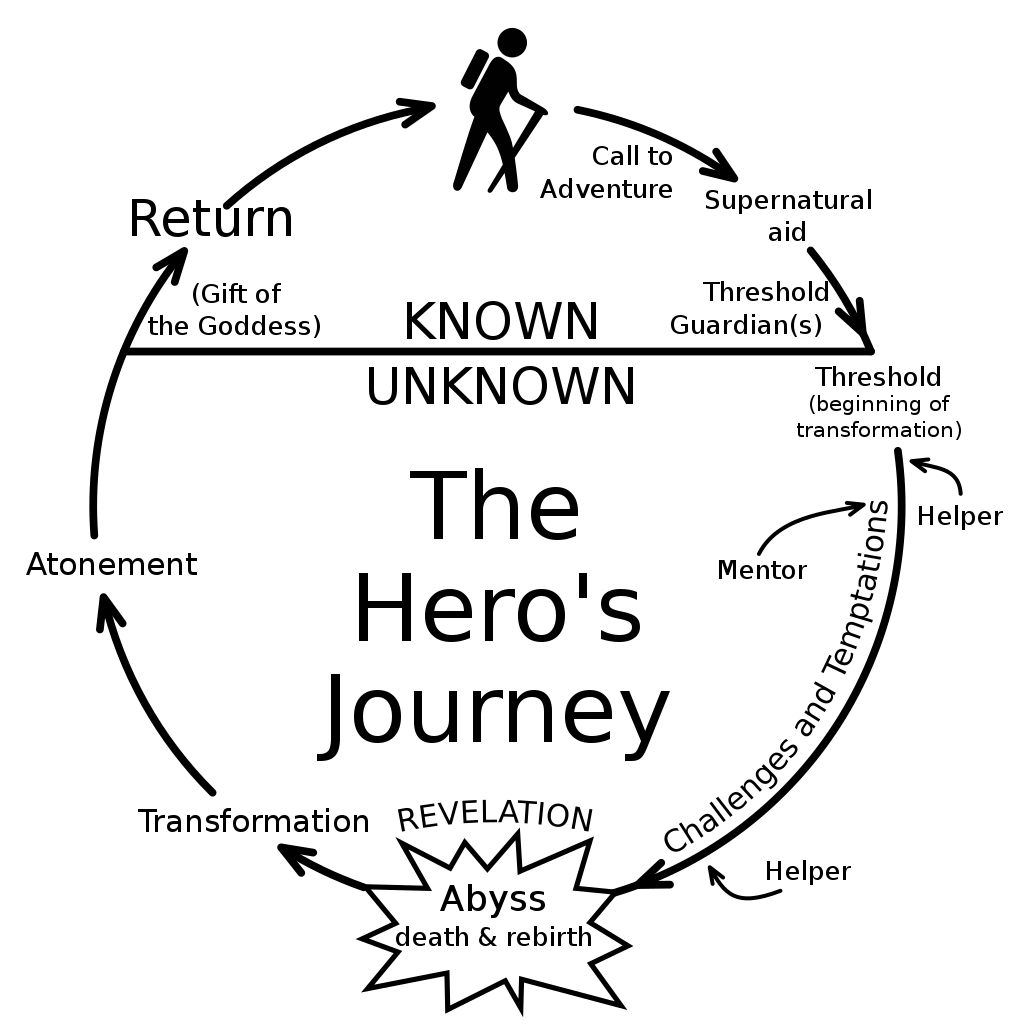 In this simple diagram of Campbel’s theory, your NGO is a helper and mentor, not the main hero. The main hero you’re going to be talking about in your storytelling is the character or characters you’ve chosen. It can be the community itself or several people from the community that your organization is helping.

It’s important to show how they change their community with your help. 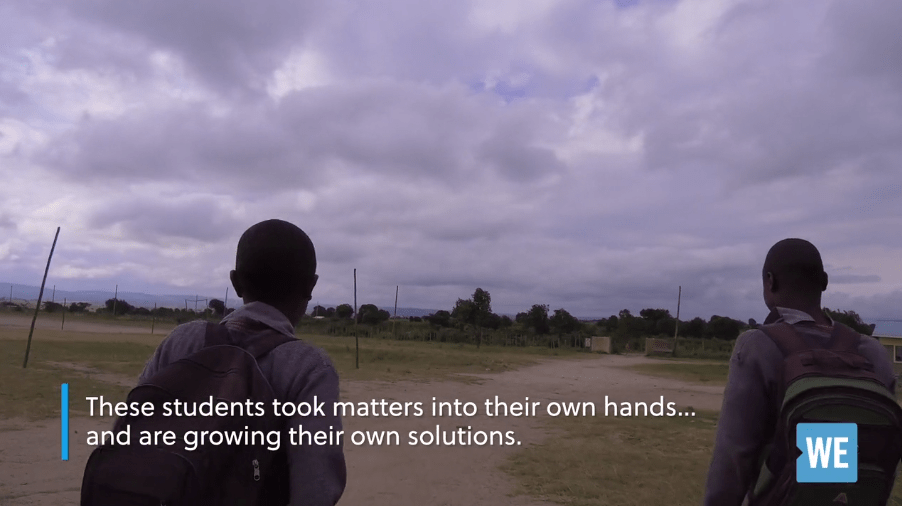 While your heroes should be the people in the communities that you help, your charity should not be completely out of the picture. After all, the whole point of telling this story is to build trust in your organization.

As a “helper” or a “mentor” from the diagram above, you should be presented in the story by the input you give to the community. Show what new ideas, tools, or any other help you gave the heroes and what they are doing with it.

Preferably, your characters should be talking about your help, not the narrator’s.

5. Foster a sense of unity

This point is probably the most important one and usually the hardest to achieve. Oxytocin – the hormone that is involved in feeling trust, is also linked to in-group bias. You have the highest chance of receiving a positive emotional response when the reader feels unity with the characters of the story.

However, it can be difficult to evoke unity with strangers who live on the other side of the world. One way to approach this idea is to show what your hero and audience have in common.

If you’ve been doing research into your donors and what matters to them, you already know what qualities to emphasize. Whether it’s religion, family values, or being progressive and entrepreneurial, give the reader something that will make them think: “Wow! We have a lot in common.” 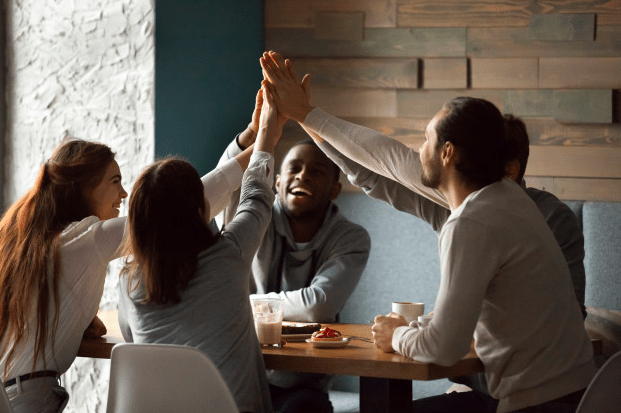 Now that you know how to create an impact with your storytelling, it’s time for you to get started. Remember the focus should be your hero’s emotions and problems; but at the same time, your readers should know how you did your bit in reaching out and helping them. How you made the hero of your story happy will keep your donors happy for good. This means more trust and increased donations.

So, get set, pen down the first-ever story for your nonprofit!

For additional tips and resources on nonprofit management, you may visit our nonprofit blog.

Michael Doer is a content marketing expert who loves to write on topics like digital marketing, career advice, marketing tips, and more. His passion for video games and history helps drive and enhance his writing. You may find him on Twitter @MichaelDoer. 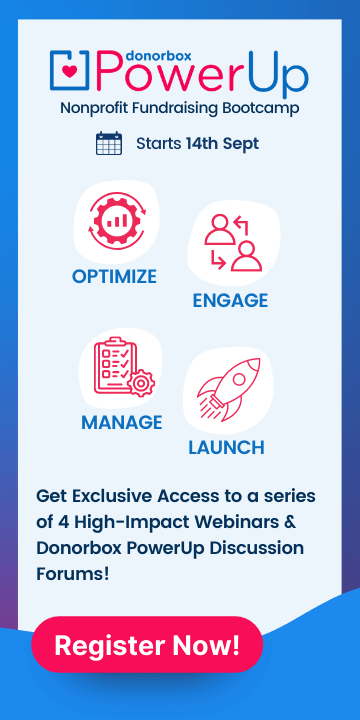