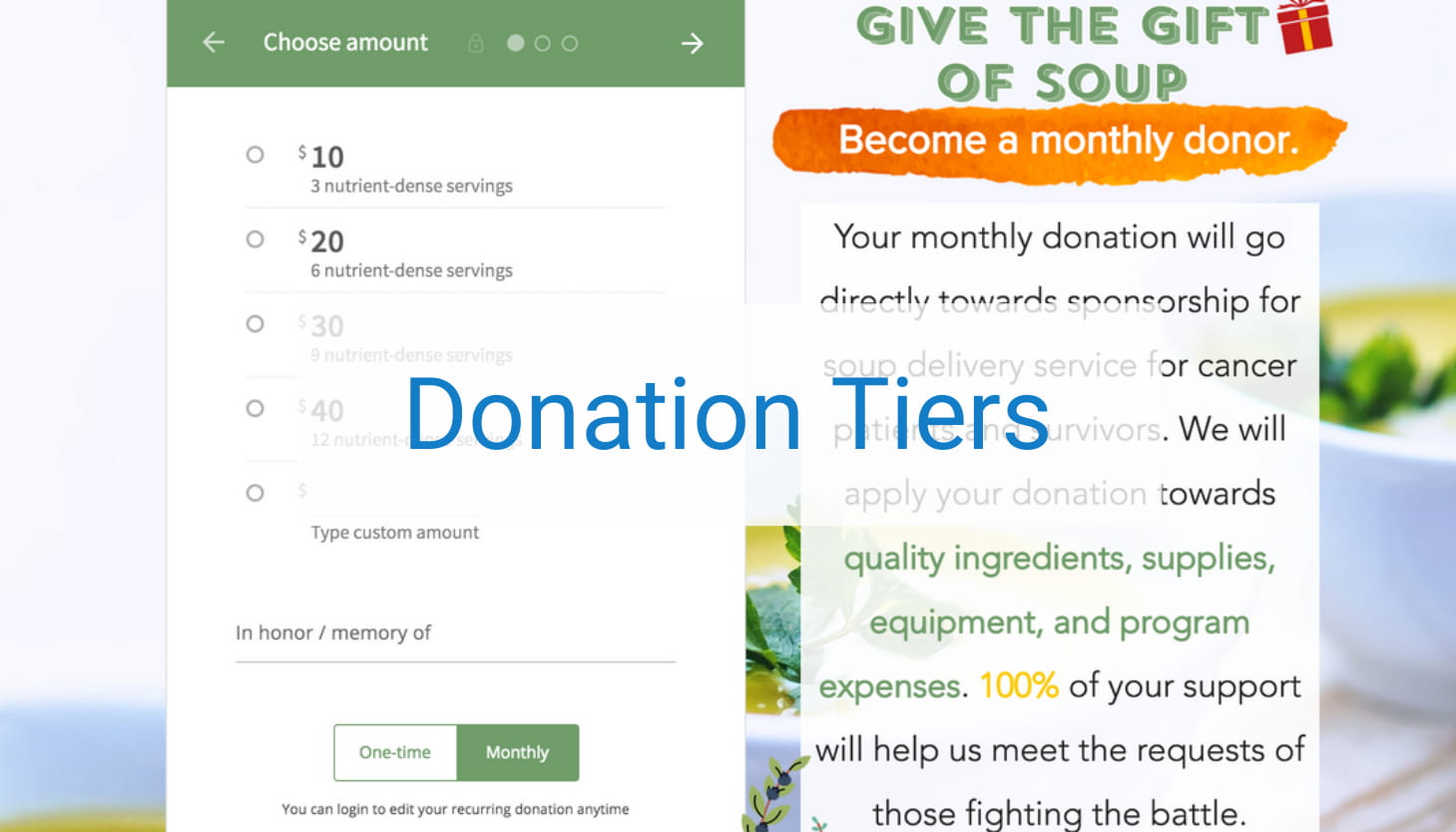 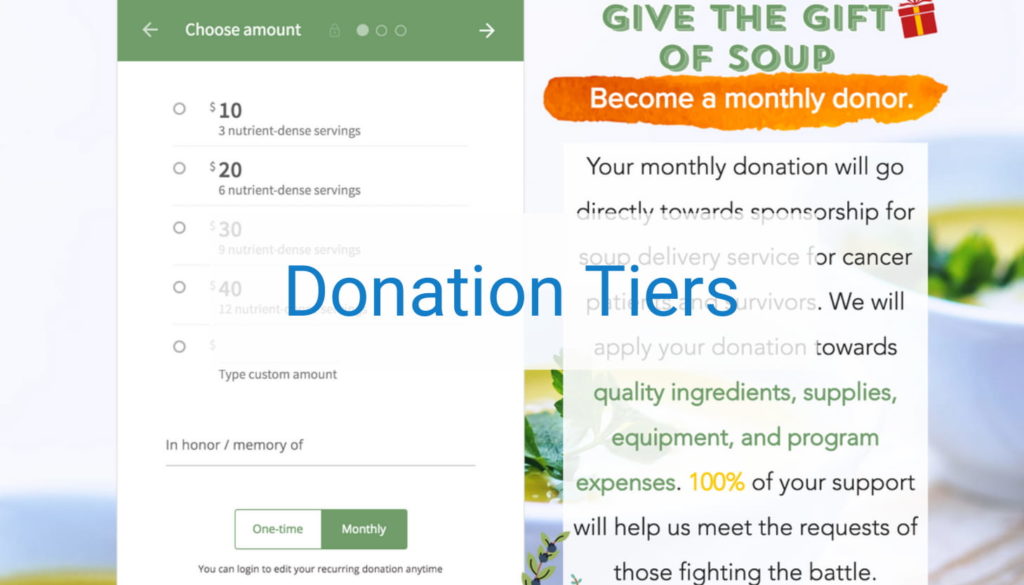 Anna is a thirty-something woman who works in an art gallery. She’s always loved animals and spends a lot of time with her three dogs in the nearby park.

During one of their walks, Anna saw an abandoned cat. She immediately acted, rushing the cat to the nearest animal shelter.

The shelter had their hands full and didn’t have the resources to take care of the cat, so Anna had to take the cat to a different one.

That same evening, Anna couldn’t stop thinking about what she saw at the shelter. Without sufficient resources, the shelter struggled to meet the needs of all the animals that needed care.

Anna immediately went to their website to make a donation.

She had initially planned to give $20 and then perhaps give again in the future. However, when she started filling in her information on the donation form, she ended up giving $70.

Why is this the case?

That was the suggested donation amount. 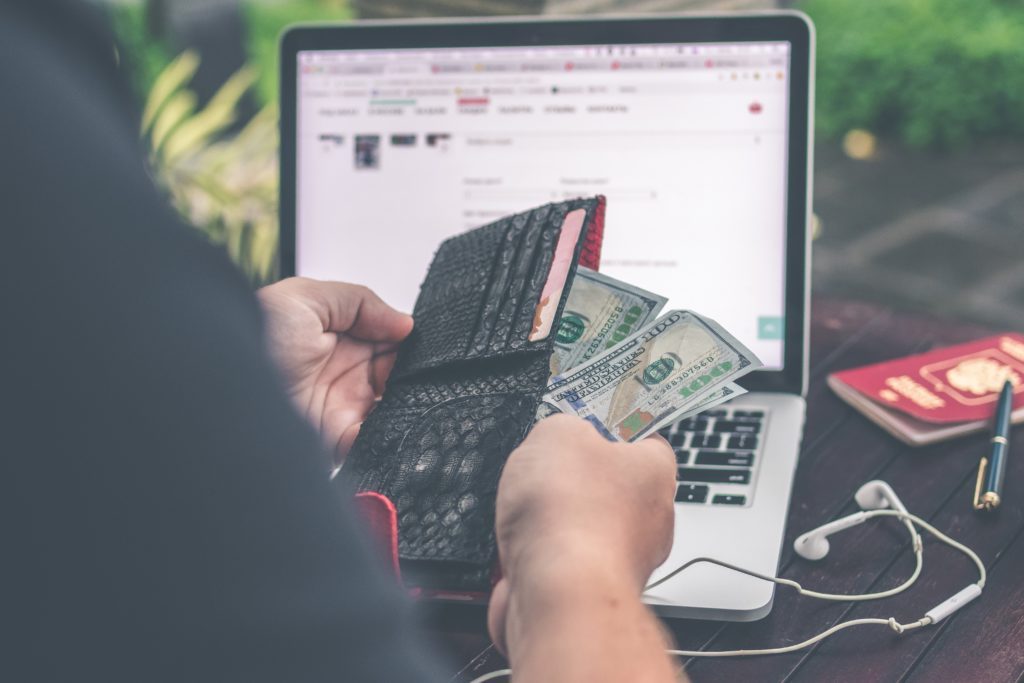 What are donation tiers and why do they work?

Donation tiers (or donation levels) offer donors choices in the form of pre-determined donation amounts (e.g. $25, $50, $500). Rather than leaving a blank space for the donor to enter an amount, donation tiers provide benchmarks. They are essentially suggested levels of giving donors can choose from on a donation form.

Next to each suggested amount, there is usually a description of what that amount will accomplish.

These benchmarks can influence a donor’s decision about how much to give. For example:

In The Impact of Social Influence on the Voluntary Provisions of Public Goods, Jen Shang and Rachel Croson explored how society influences our giving when individuals are provided with different donation levels (or “social information conditions” as they call it).

The most significant finding from the study was a 12% increase in average donation amounts when donors were subject to “social information conditions”. Essentially, suggested giving levels were helping to tell donors what amount is “appropriate” to give.

How to Set Donation Tiers? (Tips and Insights)

To set donation levels that are right for your organization, take into account your average gift size. What is the amount most of your donors give? If a large portion of your supporters gives gifts less than $20, don’t have the lowest suggestion be $70.

Doing that might discourage people from donating. This works the other way around too. If most of your donors make gifts of over $200, don’t lead them into contributing less than they normally would by setting the highest donation level at $150.

Knowing the average amount that your donors give can help you determine your lowest and your highest donation level.

Donation tiers must be researched, realistic, and relevant to an organization and its goals in order to be effective.

While it’s important to avoid discouraging donors by suggesting an amount that’s too high, you want to push the donation levels, as well as the suggested pre-selected donation amount a little bit higher than your average gift size.

The vast majority of the top 100 nonprofits used an approach that included 4-5 suggested donations paired with the option to enter a custom amount. Around half of these organizations highlighted a default suggested value (usually the 2nd or 3rd option).

3. Include an “Other Amount” Option

Don’t forget to include an “other amount” option.

By giving your donors the opportunity to decide to enter in their own amount, helps avoid them being overwhelmed with their options.

It also gives them the freedom to select an amount that isn’t suggested in the donation form, and that might work better for them – for whatever reason.

Pro tip: You should have about four to six donation tiers in total. 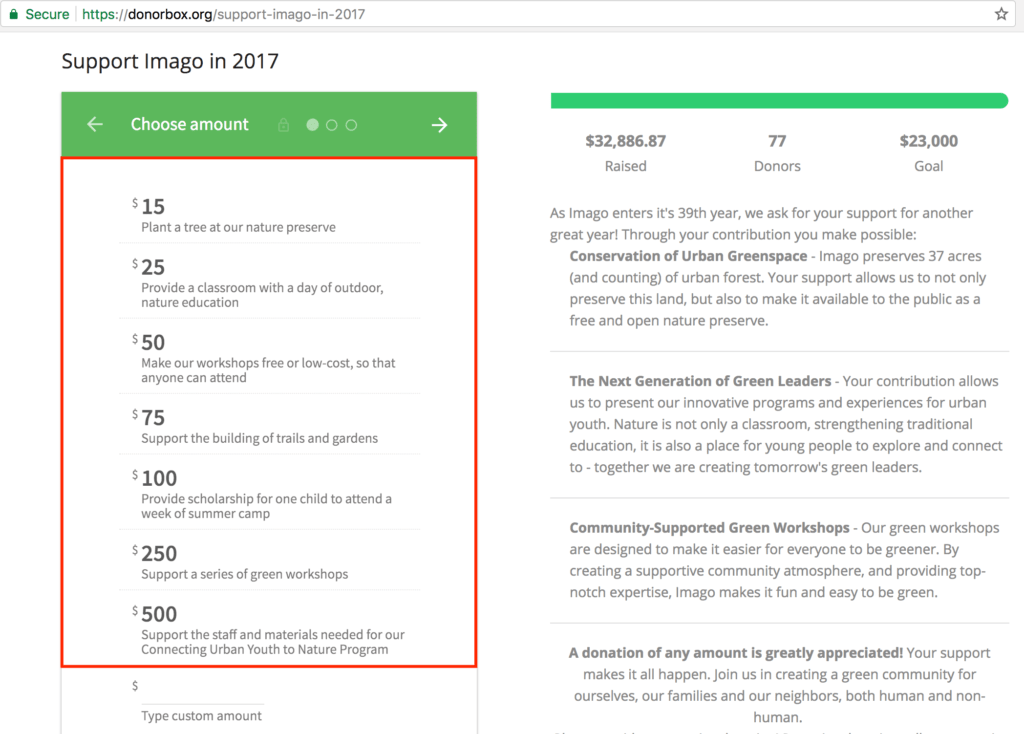 Donation levels will work best if you tie them to specific outcomes. To each donation tier, add a sentence about what this donation will “buy/provide/supply.”

Five families with shelter? One week of school for one child? School supplies for 10 children for a month?

Doing this makes these gifts more tangibly meaningful to the supporter. It can also encourage them to donate more when they see the impact their dollars will have.

These, however, need to be honest representations of a donation’s value to your organization’s overall mission and long-term impact goals.

5. Have Your Donation Tiers “Make Sense”

The average giving amount shouldn’t be the only thing informing your decision. For example, if your nonprofit’s fundraising strategy targets first time or lower level donors, you might want to list dollar amounts from $20 to $100 working to elicit lower level gifts.

If, on the other hand, you’re addressing higher-level donors, you might want to list amounts from $100 to $10,000 implying an expected donation of much larger sums.

The donation tiers and the pre-selected amount will also depend on the fundraising campaign in question. For example, you might want to set up lower donation levels for a walk-a-thon than for a gala fundraiser.

Pro tip: You can also brainstorming donation tier names for your nonprofit – don’t be afraid to get creative! Just as importantly, don’t go crazy or spend too much time on this! Donation tier names can add to the experience, but they are not the most crucial factor in your fundraising success.

Donor retention rate is one of the most important metrics for a nonprofit. Recurring donors are incredibly valuable to nonprofits. Not only do most donations trickle in from existing donors, but acquiring new donors is always more costly than cultivating existing ones.

While there are numerous best practices for boosting donor retention rates, one of the easiest is to offer recurring donations as an option on your donation page.

When you offer recurring donations on your donation form, you not only make it easier for donors to give again and again (boosting your retention rate) but, on average, donation amounts increase.

Very few donors will log back on to donate every month, which is why automating the process makes all the difference. 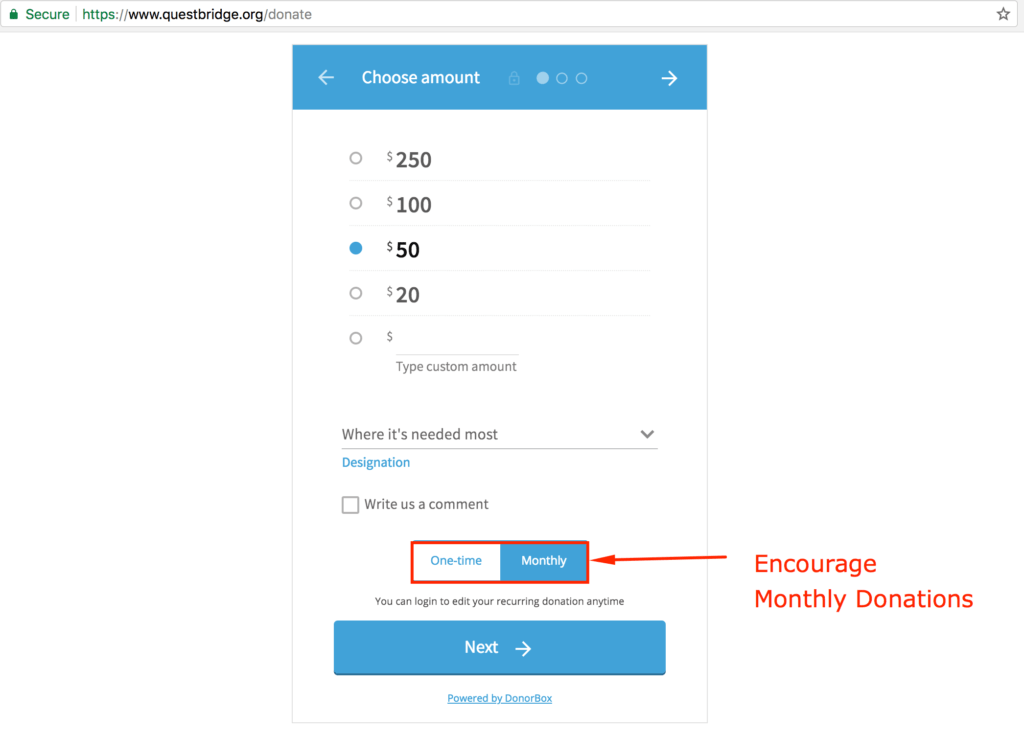 7. Use the “Right” Fundraising Software

You might have read through the article so far and gotten excited about trying to use donation tiers in your own donation forms!

You found out you can’t adjust or edit your donation forms. Frustrating!

There are plenty of third-party donation platforms that don’t allow for customization. Choose an online donation platform that lets you customize your donation forms, add in donation tiers, prompt for recurring giving, and more.

Donorbox is a powerful and efficient donation management system optimized for recurring donations. It will make building your own donation pages much easier and will provide you with a number of features and benefits, such as:

Get Started With Donorbox

A pro tip in its own regard, if you aren’t using different donation forms for different donor segments, you’re missing out.

Say you are sending out an e-mail to promote a new fundraising campaign.

If you segment your donors before sending the e-mail out, you can create different donation forms and adjust the default donation tiers to correspond with donors’ previous giving histories.

For example, let’s say you divided the list up into three sections: higher-level donors, mid-level donors, lower-level donors. How you define which donor goes into which segment will depend very much on your nonprofit. For example, for one nonprofit a ‘major donor’ might be one with an average size of $200 and for the other $5000.

Keep testing out different giving levels on your donation form to try and push your average donation size up.

With limited resources and stretched budgets, few nonprofits or charities have time to constantly A/B test their pages, but doing so – especially at the start – is likely to pay off in the future.

Constantly keep track of how your donation forms are performing and adjust donation tiers as necessary.

When looking at your results and coming up with donation tiers that make sense, keep in mind things that might skew the data. For example, if you’re counting in donations received through peer-to-peer fundraising campaigns, your average might be lower. This is because many of donors acquired via peer-to-peer fundraisers are new to your organization and are participating in a joint effort, so they tend to come it at a lower level.

Likewise, if you take a look at the post from npengage, you can see in the second table that the average gift size essentially doubles in all categories during the month of December. So, it’d be smart to exclude December data too.

Pro tip: It’s also a good idea to keep checking if your average online donation is beating the benchmark. If not, then it may be time to tinker a bit with your giving levels. Perhaps you set the default giving levels too low or too high? Try recalibrating your donation tiers.

We’ve rounded up a few examples of nonprofits that use donation tiers to enhance their donation process:

This donation form is clean, simple, and effective. Brown Line Vineyard has just three donation tiers, and there’s also an option to enter a custom amount.

The simplicity and ease of this donation form is what makes it effective. It’s immediately clear to a donor what their money will support, and there aren’t too many tiers that might confuse them. They can choose either one lower-level, one mid-level, or one higher-level tier. 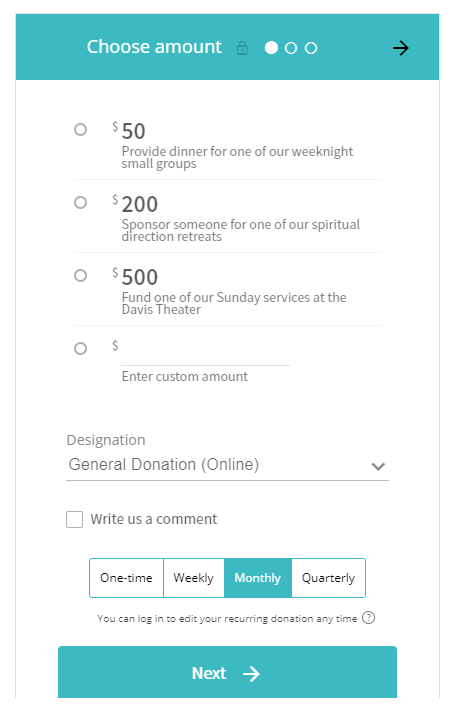 Crisis Text Line features a donation form page with four donation tiers that progressively and almost exponentially increase. With levels as low as $19 to as high as $1,008, the nonprofit offers a wide range of donation amounts to choose from – allowing donors to choose a level that works best for them.

The amounts are also more specified than usual (i.e. $1,008 instead of $1,000) reflecting precision and impact measurement on behalf of the nonprofit. 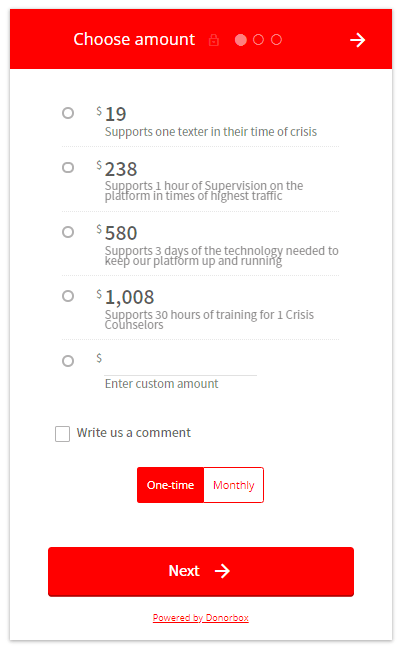 Tarjimly features a narrative summary that gives an overview of their work.

Finally, the final donation tier is very appealing. $1000 donation would enable their humanitarian team as a premium partner for a year. Meaning, they can assist the refugees for the entire year. How impactful! 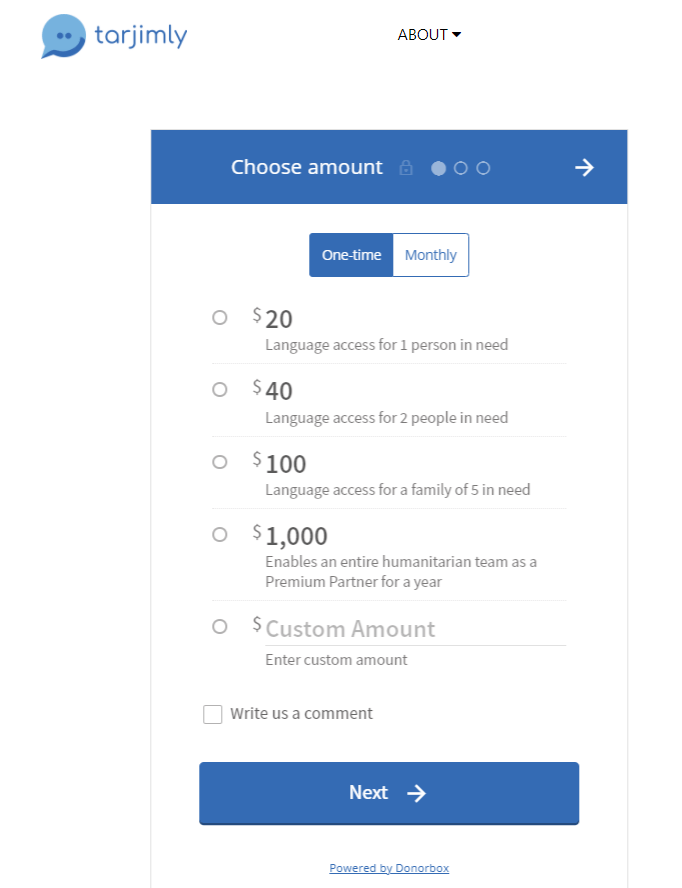 How you choose to set up your donation tiers will depend upon the nature of your nonprofit, the giving behavior of your typical donor, the fundraising history of your organization, and the context in which you are asking for the gift.

There’s a lot of room for different approaches, including the one where you choose – for whatever reason – to not use donation tiers. However, if you choose to do so, we hope these general principles and best practices helped guide your thinking as you go about choosing the donation tiers for your nonprofit.

Donation tiers are an effective fundraising boost because they help tell a story, they take the guessing game out of the picture, and they capitalize on the human need to fit in.

They make it easier for potential donors to relate to your work and understand how they can make a difference. This clarity incites action and helps you raise more money for your cause.

At Donorbox, we prioritize solutions that help our nonprofits increase their donations. We know that donation tiers and recurring donations are a vital part of nonprofit sustainability, so we built a solution responding to that need. We also made it simple and affordable, ensuring a no-hassle process for everyone involved!

And check out our Nonprofit Blog for more free resources.