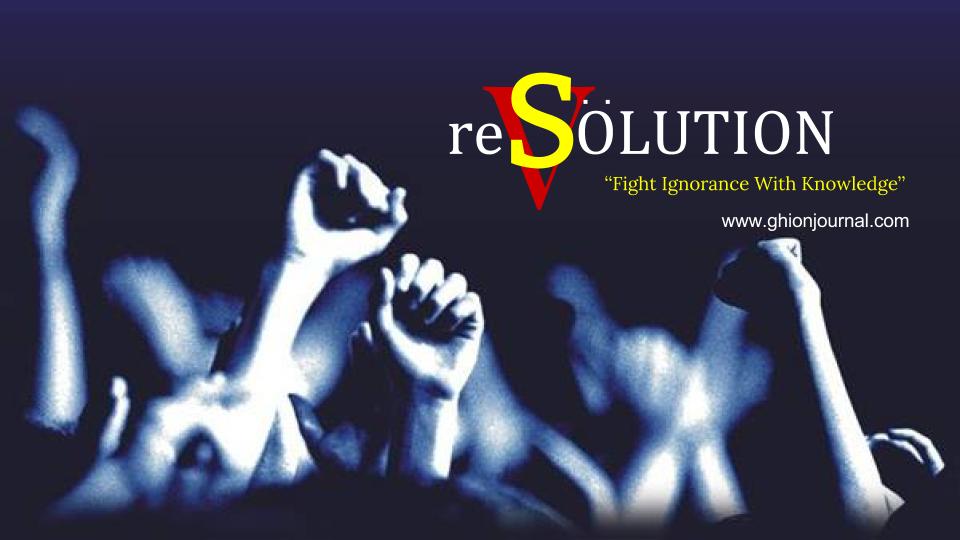 Ghion Journal, and affiliated Ghion Cast, is an audacious dream being turned into reality. After my plunge into the abyss, injustice is no longer a theory; I see now that injustice is a pernicious germ that infects humanity without regard to the labels we append to one another. As a student of Mass Communications with an MBA in Marketing from Johns Hopkins, I know full well the awesome power that the media has to affect change. Sadly, the inverse is also true, when Mass Media is owned by a few who have a vested interest in fracturing humanity, the few can then unleash the media as a weapon of mass confusion and use the airwaves to incite hatred between brothers and sisters and fellow victims in the struggle.

And this is precisely what is taking place, the moneyed few have deployed vacuous personalities to fracture the citizenry into islands of grievance and resentment. Politicians, pundits, and stars—duplicitous demagogues through and through—have been weaponized to fracture us and keep us in a state of perpetual stasis and hostility. The sensationalism, outrage, and rancor all have a purpose; as long as we are distracted by emotions, it prevents us from realizing the source of injustice and the root of our collective anger. What I am alluding to is not about politics, this is about logic, the endless labels and isms we identify with are nothing more than means of nullifying the power that “we the people” have inherent within all of us. And it is this self-nullification that the powerful count on in order to perpetuate their power at the cost of our God given right to pursue freedom and happiness.

It is into this breach that Ghion Journal steps in; I’m not here to cater to the crowd or get amens from the choir. My task is the harder path, my hope is to somehow be the bridge between the endless groups and classes which keep being created to shatter humanity and find instead a common ground in the midst of our common hopes. What I have learned over the past 20 years of formal education and consulting for the very same overgrown and corrupt government of ours, I am now going to leverage these skills and do my part to speak truth to power and hold the powerful accountable. The fourth estate is dead and no more, these supposed journalists are more concerned about collecting paychecks from the very people they are supposed to keep in check and amassing followers on social media instead of reporting on corruption and graft.

It will be up to us, citizen journalists, to reclaim the fourth estate from infantile pundits, repossess our mantle as bosses of this run-amok government and take back our nation from these two farcical political parties who thrive through our misfortune.

Ghion Journal is my attempt to do just that, to step into the void and at once speak against power and empower the people. By writing and speaking about the five pillars of history, politics, culture, faith, and love, it is my hope to build a bridge to disparate constituencies and connect both the frustration and the aspirations of the most ardent political and cultural adversaries. When we see our common humanity what will bleed away, I pray, is the animosity. In the same place where antagonism thrives, unity and togetherness can emerge if we only stop speaking past each other and instead talk to each other. Ghion Journal is an attempt to be a conduit where strangers can become friends and where adversaries can become allies.

To realize this potential, I will  be depending on the readers and fellow thinkers of Ghion Journal to empower me and give wings to my hopes. The most important way you can do that is to first and foremost take part in the discussion and bring more “seconds” to this website and share the ideas expressed either on the website or on Ghion Cast to others. What I mean by second is simply this, and idea expressed by the first person is useless on its own. The greatest idea, if it was not shared to the second person, effectively will be still born and be buried along with the person who came up with the idea. Thus, the most important person in any idea, movement or revolution is not the first person who came up with the idea, it is the second person who said “yes I agree, I want to be a part of that too”. But the seconds, just like time, are endless, there are infinite “second” believers in the ideas expressed by the “first”. So I am hoping that you become my “second” and take part in the ideas and aspirations that I am expressing on Ghion Journal.