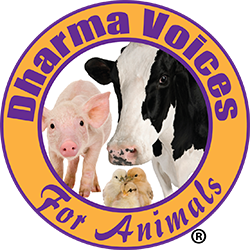 Dharma Voices for Animals is happy to announce the launch of our latest and biggest campaign – The Sri Lanka Project.  The Project is encouraging the 15 million Sri Lankan Buddhists to transition toward a compassionate plant-based diet.

Sri Lanka, an island nation of 21 million people including 15 million Buddhists, holds a unique place in the Buddhist world.  Buddhism has been the major religion on the island since its official introduction in the 3rd century B.C. by Arahant Mahinda, the son of the Emperor Ashoka of India – the longest continuous history of Buddhism of any nation.

Since that time the Sangha (Order of Monks) has a largely unbroken lineage, and Sri Lankan monks and lay people have played a prominent role in spreading Theravada Buddhism to Asia, the West and even Africa. Buddhism is the official religion under the nation’s Constitution.

Over the past six years DVA has developed a strong presence in Sri Lanka. During DVA President Bob Isaacson’s 2015 trip there, the Speaker of the Sri Lankan Parliament, the Honorable Karu Jayasuriya, attended the inauguration of our Colombo Chapter and gave a televised speech in support of DVA.  The President of Sri Lanka, Maithripala Sirisena, invited Bob to meet him in person to discuss our support of a ground-breaking animal rights/welfare bill, and we have developed working relationships with many of the nation’s leading monastics.  A major national newspaper, the Daily Mirror, published an editorial which was extremely supportive of DVA and our message promoting vegetarianism/veganism for all Buddhists.

We kicked off our Sri Lanka Project at our second annual Asian Buddhist Animal Rights Conference in the capital city of Colombo on October 26, 2017, which was attended by 600 people and broadcast on national television. The Speaker of the Sri Lankan Parliament, the Honorable Karu Jayasuriya, gave another speech in support of DVA and our Sri Lanka Project. We again received extremely favorable media coverage, including the front pages of national newspapers. After the official inauguration, DVA's team has appeared many times on national television, made live presentations at some of the 8,000 Dhamma schools, and hosted a May 2, 2018 event when we gave out 2,500 vegan ice cream cones, receiving front page newspaper coverage. Our Sri Lanka Project Facebook page has over 500,0000 users.

Sharing news of our work in Sri Lanka has led to an outpouring of support, and we are within $10,000 of our fundraising goal of $78,000 to further our message of compassion! Reaching this target will have a double impact by raising an additional $10,000 with our dollar-for-dollar match and will insure that the first year of DVA’s Sri Lanka Project is fully funded!

The GIFT you make today will go twice as far to support DVA’s important work in the Buddhist country of Sri Lanka to reduce animal suffering and save the lives of millions, perhaps billions of animals.

No gift is too small.

Please also consider a monthly gift. No gift is too small.

Imagine a world in which animals are not considered food, a world in which Buddhist communities around the world are setting a shining example. Make your GIFT to DVA now so that you can say you were part of that achievement.

Thank you for your generous support for the work of DVA!

DVA is a tax-exempt charitable organization under section 501(c)(3) of the U.S. Internal Revenue Code and is eligible to receive tax-deductible contributions.