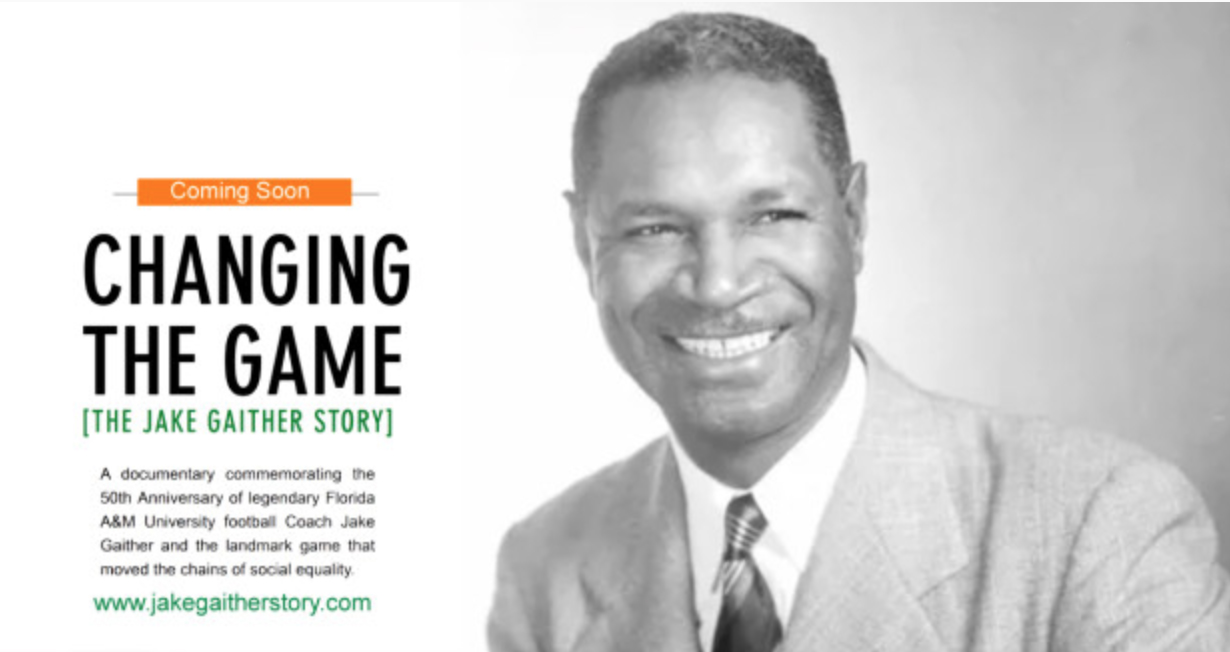 Coach Gaither has an incredible story — from beating brain cancer, supporting FAMU student activists during the Civil Rights Movement, using his influence among white politicians to safeguard FAMU during the period of segregation, nurturing athletic greats like Bullet “Bob” Hayes and Willie Galimore,  and being the winningest coach of his era. He was a humble man who helped change many lives, especially those of his players known as “Jake’s Boys.” He was a father figure to his players, a student advocate, consummate administrator, and coaching genius. The documentary captures the compelling legacy of Gaither — revered as a motivator of men, respected as an influential leader, and unrivaled as a coaching icon.

Your contribution will help bring this important story to completion.

A central goal of this project is to restore Coach Gaither back to current sports memory where he belongs. The documentary preserves and promotes his legacy among current and future generations. He deserves it!

What We Need & What You Get

If we do not reach our entire goal, the funds will be used to get us as far ahead into the production as we can as we secure alternative means for completing the project.

Other Ways You Can Help

Please help spread the word about the documentary and the fundraising campaign by sharing with friends and contacts, especially among the Rattler Nation.  Post, re-share, and re-tweet on Facebook, Instagram, Twitter, or any other social media where conversations about preserving heritage and culture are being discussed.

As an independent documentary production, Changing the Game: The Jake Gaither Story comes with its own set of challenges with securing the amount of funding needed to hire industry professionals and the quality equipment needed to produce a top-level project.

Risks and Challenges include making a realistic assessment of how to achieve our goals with a minimal budget. However, we have already planned ahead. Every decision supports our commitment to honoring Coach Gaither's contribution to this world.

Yanela McLeod strives to elevate social consciousness and improve race relations by sharing important stories related to the African-American experience. Author of The Miami Times and the Fight for Equality: Race, Sport, and the Black Press, 1948-1958, she has spent her professional career as an educator, journalist, and social historian. In 2017, she served as editor and facilitated the publishing of the book, Agile, Mobile, Hostile: The Biography of Alonzo S. “Jake” Gaither, written by Prof. Roosevelt Wilson, her former professor who  was like a father. She earned both a Ph.D. in African-American History and a master’s degree in U.S. History from Florida State University. She is also a graduate of Florida A&M University, where she graduated with a bachelor’s degree in broadcast journalism. She is currently director of Communications and Alumni Relations for the FAMU College of Social Sciences, Arts and Humanities, where she is also an adjunct professor of history.  From 2003-2014, she was as an assistant professor in the FAMU School of Journalism & Graphic Communication. For five years during the tenure of Roosevelt Wilson as publisher, she was associate editor and senior reporter for the Capital Outlook, a black-owned newspaper in Tallahassee. A native of the Republic of Panama, she was raised in the historic Armstrong Community located in Elkton, Florida, a small township on the outskirts of St. Augustine, Florida.

Sean Woods (affectionately knows to many as Sean-D), is a full-time cinematographer, photographer and owner of S/W Media (seanwoodsmedia.com). He enjoys working with new clients and loves the fact that they trust him to bring their thoughts to life. After working with so many people and companies, he says the best part is seeing and hearing their excitement once projects come together in the end! Sean takes pride in helping others bring their photo and cinematography ideas to life. Many have the ideas, but the tough part is figuring out where to start and how to put things together. That’s where he comes in to help with that extra push. Sean has been practicing photography for nearly 10 years. Initially, he randomly started taking photos everywhere. He would post them on his social media sites, just to share, but soon after, people started to inquire. At that point, photography and cinematography started to have a different meaning, as he began to photograph and film everything from weddings to television ads. One of his favorite parts of this journey is the fact that things are always different. No client or event is the same. It keeps him on my toes and pushes him everyday.

For several decades, the Meek-Eaton Black Archives Research Center and Museum, more simply known as the Black Archives, kept a little secret behind her doors — E. Murell Dawson, Ph.D. Dawson is a treasure trove of African-American history and culture and is the safeguard and preserver of Florida A&M University history. Dawson, who served as interim director of the Black Archives for 13 years, is the archivist and lead researcher at the museum where she was apprenticed by its founder, the late Dr. James N. Eaton. Dawson began her undergraduate career at FAMU on a scholarship in the late ’70s. In four years she graduated with a degree in print journalism, and a minor in history. Later, she acquired a master’s degree in history but focused specifically on museums and archives. Following her return to Tallahassee in the late 1990s, the Dawson era of the Black Archives began. She was tasked with organizing print records under Eaton’s direction. Dawson her tenure as director, the museum underwent a plethora of improvements and accomplishments. These include the installation of several historical markers both on and off of campus, as well as the addition of the expansion facility, which opened to the public in 2006. Dawson is an incredible communicator, whose writing captures the full depth and delicate nuances of the narrative.

Selected as a Teacher of The Year, Jones is a broadcast journalism professor in the FAMU School of Journalism and Graphic Communication. He has been a filmmaker, and news and documentary reporter/producer for more than 30 years. He has won regional, national and international awards, including a CINE Eagle and a Silver Addy Award. As a filmmaker, his docudrama, Rosewood, aired nationally on PBS stations, and was instrumental in Florida’s legislative action for Rosewood victims. His current feature film, “My Music,” involves the miracle of music that is tragic and transforming for a girl, Ruth, who is the caregiver for her aunt who’s suffering from Alzheimer’s.

Gina Kinchlow is president and CEO of Kinchlow & Company, an award-winning boutique PR firm that specializes in small business consulting services, strategic marketing communication, training and development, and business start-up consultation. She is also a marketing professor in the FAMU School of Business and Industry and former director of the Big Bend Minority Chamber.