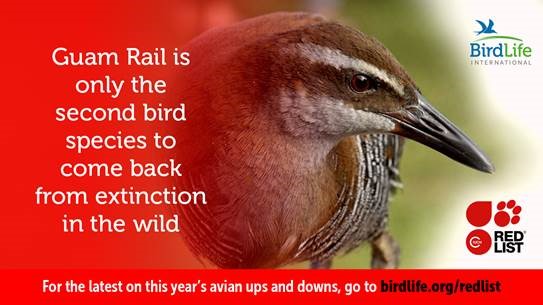 The IUCN Red List is the most comprehensive, objective global record of the conservation status of plant and animal species. As the Red List Authority for birds, we’re pleased to see that conservation efforts have led to improvements in the status of some species. This includes the recovery of the flightless Guam Rail, a bird previously listed as Extinct in the Wild, thanks to a 35-year captive breeding programme.

In Mauritius, the Echo Parakeet continues its recovery thanks to conservation efforts, including a highly successful captive breeding programme by the Mauritian Wildlife Foundation (BirdLife Partner) and the National Parks and Conservation Service. There are now more than 750 Echo Parakeets in the wild, and with this year's Red List update the species has been reclassified as Vulnerable.

Sadly it’s not all good news.

“The recovery of the Guam Rail and Echo Parakeet is fantastic proof of how effective targeted conservation action can be,” says Dr Ian Burfield, BirdLife’s Global Science Coordinator for species. “However, it is important to remember that not all species can be brought back from the brink, especially if their natural habitat has been destroyed. The priority should always be conserving habitats to prevent declines and extinctions from happening in the first place.”

As if to drive this message home, in 2019 the Spix’s Macaw, made famous by the 2011 animated film Rio, has officially been reclassified as Extinct in the Wild, and three species have been classified as extinct; the Cryptic Treehunter, Poo-uli and Alagoas Foliage-gleaner. Two of these three extinctions took place in Brazil’s dwindling Atlantic Forest – reflecting the devastating effects of deforestation in this part of the world.

Increasing Evidence of the effects of climate change.

Climate change has contributed to the declines of species including Dominica's national bird, the Imperial Parrot. The increased frequency and intensity of hurricanes in the Caribbean has resulted in a high bird mortality and habitat destruction, alongside the devastating impacts on people. There are now estimated to be fewer than 50 mature individuals left in the wild and the species is classified as Critically Endangered.

We continue to fight to save birds across the planet. This year for example, the Banded Cotinga has been uplisted to Critically Endangered due to severe deforestation. Fortunately, BirdLife Partners across Brazil, Argentina and Paraguay have united on a major project combining nature reserves, ecotourism and sustainable farming to ensure the forest’s long-term protection. Hopefully, it’s just in time – because most extinctions are not as reversible as the Guam Rail’s.