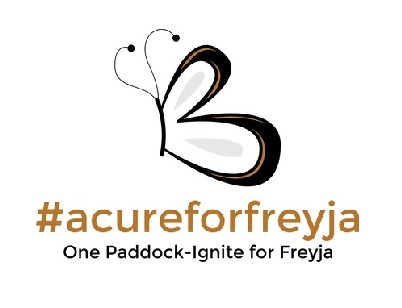 Here is Freyja’s story told by her Mum Lizzie

It was 23rd December 2016 and my daughters Brynn 9, Inge 7 and Freyja 5 had just finished a fun filled day of horse riding. Exhausted from the days’ activities of feeding, grooming and riding horses, the girls looked forward to their nightly bath and bedtime routine.

With lots of giggles and chatter about the day, whilst washing Freyja's hair and listening to her excited talk about the horses, my focus shifted slightly as I found what seemed like a hard lump on Freyja’s neck which I had not felt or seen before. After many tests and scans throughout January 2017 I received the devastating news that my little Freyja had a very rare form cancer. Her cancer is so rare that it took a team of International Specialists supporting the Sydney Children’s Hospital to identify. The new and most likely diagnosis given to me was Clear Cell Sarcoma, formerly known as a type of soft tissue melanoma.

At the time I was told that it’s an aggressive disease, the location of the tumours was thought to be inoperable, and it was potentially incurable. So, how do you tell your 5-year-old, and her siblings, she has cancer? It was the hardest conversation I think I will ever have. I said to myself that I wouldn’t give up or accept anything without researching myself, and Chemotherapy was never going to be an option. Fortunately for Freyja, the Oncologist assigned to Freyja’s case was Dr. Antoinette Anazodo who was the Paediatric and Adolescent Oncologist, Director of the Sydney Youth Cancer Service, and NSW Lead for Youth Cancer in NSW and ACT, and the Oncologist with a reputation who never gives u!

Meanwhile, how do you as a single mum cope? You fight to find a cure…. The prognosis of Clear Cell Sarcoma is guarded, mainly because the disease it is difficult to catch early and is prone to relapse and spread long after initial diagnosis. Typically, patients with Stage 4 Clear Cell Sarcoma have not lived beyond 12 months from diagnosis and typically only live actually live for 6 months, a bleak prognosis. As Freyja was first diagnosed with cancer in December 2016 and formerly with Clear Cell Sarcoma in January 2017, I was left with the reality that I may only have 5 to 6 months to save her life.

Freyja was started on a new drug trial of Immunotherapy February 2017 thanks to the tenacious Dr Antoinette. This slowed the disease but did not offer a cure, i.e. disease free when she was reviewed in July 2017. Freyja was also suffering side effects causing other health complications. So, with many international experts and more tests in different states it was decided to restart the immunotherapy but this time with a single drug and Freyja could transition to being at home in between hospital treatments. Finally, we were going home after 9 months in Sydney and I thought, wow Freyja is still here, she has a chance. At the same time the Metatron Australia team had been boosting Freyja’s immune system and monitoring her nutritional needs daily. I credit Dr Antoinette and Metatron Australia for the reason she was still with us.

Freyja completed the new Immunotherapy trial on December 18th, 2017, at Sydney Children’s Hospital, which once again showed a response by slowing down the disease but not curing it. We went home for Christmas for a break which was bitter sweet, grateful she has survived longer than anyone thought possible and in relatively good spirits but not knowing if she would make it beyond January as her side effects were awful. It was decided that immunotherapy would be stopped as to continue could cause her to lose her life. We had to come up with a new plan. Proton Therapy was suggested by Sarcoma Experts in both Germany and the US earlier in the year and her Godparents, Lora and Fred, had been fund raising since May 2017 to get us overseas for new trials and proton therapy as her only option beyond the trial she was then on. Unfortunately, we hadn’t raised nearly enough so we didn’t stop phoning experts or looking at other options.

Then, a miracle happened, this changed everything…

Dr Antoinette, Lora and I had been ringing around the world trying to find alternatives. 37 surgeons said they wouldn’t operate and other hospitals refused admission onto new trials or the trials would have to be self-funded which was out of my financial reach. A chance discussion with Boston Children’s Hospital lead us to the amazing Melbourne team who had a new DaVinci robot. At the time the DaVinci robot had not been used in a child so young for this type of surgery in Australia but that didn’t stop Dr Ben Dixon, Epworth Hospital Melbourne who agreed to perform ground breaking robotic surgery in February 2018. The plan was made to remove the tumours in her head and neck prior to the then planned overseas trip for Proton Therapy April 2018. He was another hero I added to my ever-growing list. We made history and shared our story with the world media, so he and other surgeons could give others hope too. Best of all Freyja’s chances and prognosis just got better.

The first surgery was successfully completed February 28th with a second and third surgery in March and April. It was so successful that Freyja no longer had to travel to Germany, C’Republic or the US. Instead Freyja was transferred to the Peter Mac Cancer Centre, also in Melbourne to start pencil beam radiotherapy after a short break at home to recover. The new plan was under the oversight of Melbourne Royal Children’s Hospital (Dr Lisa Orme) supported by a brilliant collaboration between experts and hospitals; Prof Grant McArthur, Dr Greg Wheeler, Dr Antoinette Anazodo, Dr Ben Dixon, Dr Anne Mitchel, Dr Antonio Didio, Dr Peter Lafferty) in a brilliant collaboration between the state hospitals.

After 28 treatments of Radiotherapy Freyja had wasted away to 19 kilos. She was sent home to recover for 8 weeks with reviews, tests and more scans. Unfortunately, once again she was not completely cancer free and so under the Royal Children’s Hospital Melbourne, after many delays due to side effects, she restarted a new Immunotherapy 12-month protocol Tuesday 21st August 2018. Freyja is battling side effects, persistent cancer and no appetite through mucositis making it a constant battle to keep her here. I must remain hopeful and know that a cure is possible.

Thanks to the ongoing support of her treatment team and Metatron Australia, Freyja now 7 years old, has a real chance at life. By sharing her story and offering hope to others who we have come to know, I’m so proud of my girls to be part of that journey. I’m so grateful to all those who continue to share our journey and support us through donations of their time and money. Keeping us together is so important.

Facebook
LinkedIn
Twitter
Choose amount Information Payment       
Note: This amount is not a tax deductible gift or contribution for Australian taxation purposes. You can always check with a tax professional to be sure. Please seek advice from your accountant to determine if it is deductible under any other category. International donors, please check with your tax professional, local state or federal governing bodies.
Facebook
LinkedIn
Twitter

Sending you all strength and love

Hi Lizzie! I run a digital agency based in Maroubra and heard about Freyja through Marissa. This year I will be making a donation to you every time we make a sale. Wishing you and your family all of the best. Jay, BotMarketing.org

Love from lbh salon! Our thoughts are with you ❤️

Freya your video yesterday broke my heart Lizzie I run the Canberra Kids Facebook page If u like I’ll add u as an administrator and u can share on it anytime !

I wish you all the best on this tortuous cancer journey with your precious daughter. I hope you get the breakthrough that you need.

All the best Freyja and fam xx

You are such an amazing family, I can't imagine dealing with this - so many people are behind you, sending so much love x

Sending you all our love and positive vibes princess! You’re doing amazing and you have the most amazing team around you. Lots of love to you all 💕🌈💫

Magnificent little girl you are Freyja! From the Ruffy Family.