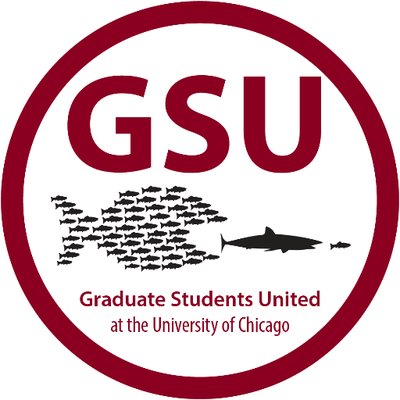 Support our fight for a contract!

We are fighting for a contract - again! On September 27, 2022, we launched a union authorization campaign as a local of the United Electrical, Radio, and Machine Workers of America (UE). We enrolled more than 1,000 graduate workers on the first day, and are surging toward filing for an election with the National Labor Relations Board! Being a worker-led organization means being worker-funded. While we sustain our organization through monthly contributions from our members, we are also asking for donations from friends, alumni, and supporters of the labor movement to help us win this fight.

We appreciate the steadfast support from alumni who are independently withholding their donations to the university until we win recognition, and we hope that our supporters will consider giving to us directly to help us fund expenses such as rent for our office space, campaign supplies supplies, and dedicated staff to support the nuts and bolts of our organizing on a daily basis. Please consider a recurring or one-time donation to help us win our historic campaign!

GSU’s current platform is based on a grad student survey that was circulated in the Summer of 2022 and includes the following demands:
1. A living wage, always
2. Guaranteed dental, vision, and comprehensive benefits
3. Equitable policies for labs, classrooms, and community
4. Fairness and support for international students
5. Transparent budget and power in decision-making

Graduate Students United (GSU), the labor union of graduate workers at the University of Chicago, was established in 2007. At the time, many graduate students were not getting financial support, and the salary for TA was $1500 per quarter: one of the lowest in the country. Over the past decade, the University community saw many improvements to graduate student life and working conditions, in large part thanks to the continuous campaigns of GSU to make the university a better and fairer work place. Yet, there is one major achievement that we are still fighting for: to get recognition as workers and as a union.

In October 2017 we held a democratic vote about unionization under the NLRB, following the Board's ruling in 2016 (in the case of Columbia) that graduate students at private higher education institutions should be allowed to unionize. Voter turn-out was remarkably high (over 70%) and graduate workers voted overwhelmingly for unionization: Out of 1582 voters, 1103 voted Yes for GSU. The University administration, who the day before the vote urged graduate students to cast the ballot, because "your voice truly matters," announced that it will challenge the validity of the election because it doesn't view us as workers. 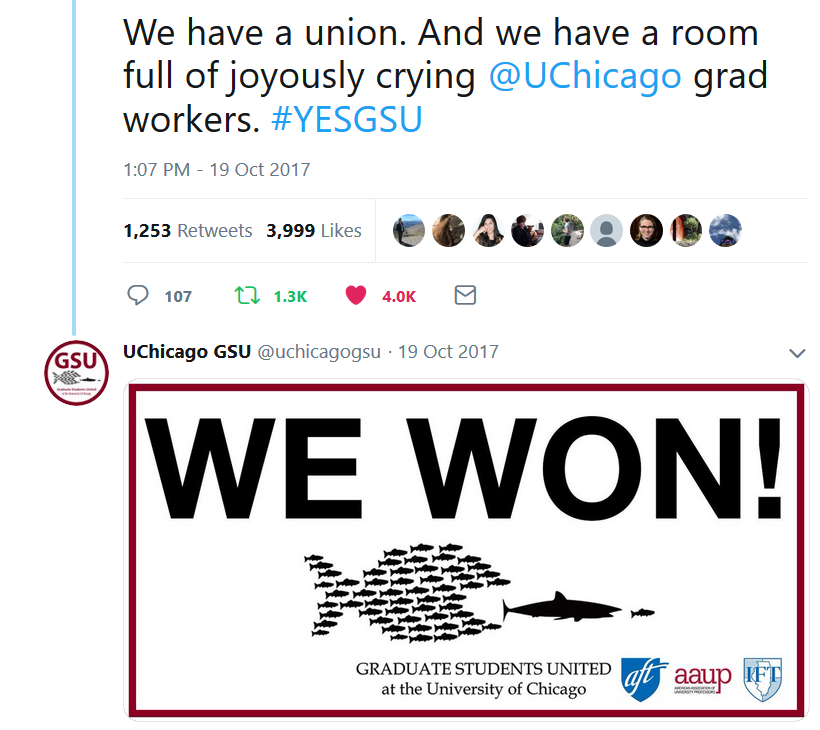 The university appealed the election, hoping that the NRLB, now controlled by the Trump administration, would overturn the Columbia ruling. In February 2018, along with multiple graduate unions across the country, GSU withdrew its petition for recognition from the NLRB, in order to protect the legal right of graduate workers to unionize. Peer institutions have recognized their grad unions, for example: Harvard, Columbia, Brown, NYU, MIT, Georgetown, American Uni., and Brandeis, not to mention dozens of other institutions, public and private. But our university's top administration has been adamant in its refusal to recognize us for what we are - workers - and it keeps referring to an organization of more than 1500 of its employees as "an undefined group of graduate students".

Yet, we remain unified, organized and strong. In June 2019, in the last week of the academic year, we conducted an extensive work action, and for 3 days withheld our labor and picketed campus. Hundreds of graduate workers received massive support in their action from undergraduates, contingent faculty, tenured faculty and other university and non-university workers. Our work action transformed the campus for these 3 days, and demonstrated not only our resolution and strong support, but also how the university community can rally behind a just cause.

During the pandemic, we participated in mutual aid and solidarity work as an independent union to meet the most pressing needs of our members and our broader community. We also launched an unprecedented campaign in which hundreds of graduate workers withheld their Student Services Fee payments, resulting in cancellation of the SSF fee and an effective raise for graduate workers across the university. Now, as affiliates of the United Electrical Workers, we are joining a wave of new organizing campaigns across higher education.

We are fighting to win recognition once and for all. And to win this fight and get to the bargaining table, we need your support. You can support our cause by making a one-time or a monthly / quarterly donation to our campaign.  We wholeheartedly appreciate your support.

Thank you! And solidarity forever!

As an alum I'm so grateful for your work, solidarity.

I'm so heartened to see this campaign continuing so strongly after I graduated. You all are awesome!

Stay strong! I so regret that we did not unionize when I was a grad student in the 1980s. You all are inspiring

In grad school, I helped organize the grad student union at Berkeley. Keep up the good fight.

It’s been too long fighting to win basic rights, but you all are finally going to do it. GSU alumni are rooting for you.

if you don’t get it, shut it down

In some past years, as an alumnus, I have donated money to the University of Chicago. But until the UofC undertakes serious discussions with Graduate Students United and recognizes GSU, I will no longer be willing to do so.

Shut. It. DOWN! Solidarity with all the workers—grad, rail and everything in between!

Keep up the good fight! I am proud to have been part of GSU and in awe of the way you all have kept the fight going strong.

Solidarity with GSU since 2015!

In rage and solidarity!

I am proud and excited to pay my union "dues" to contribute to the fight for my rights, those of my fellow graduate student workers, and of all U of C affiliates and members of local and academic communities beyond.